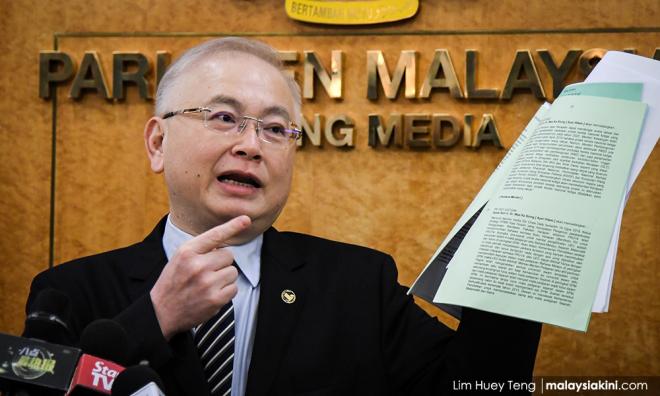 MP SPEAKS | Yesterday, we read Wee Ka Siong’s valiant attempt to defend Najib Razak’s honour by claiming that 1MDB was “beneficial and played an important role in the development of the country”.

He pointed to Prime Minister Mahathir Mohamad's statement that Bandar Malaysia would have a gross development value (GDV) of RM140 billion, while Finance Minister Lim Guan Eng had earlier said the Tun Razak Exchange (TRX) project has a GDV of RM40 billion.

"When both are combined, the total is RM180 billion. It is more than enough to foot the RM30 billion [1MDB] debt.”

I am floored by how Wee, a professional engineer with a doctorate to his name, could mistake GDV as profits which could be used to repay 1MDB’s RM31 billion of debt.

1. GDV is not equal to profit

Firstly, for the benefit of the MCA President, GDV refers to gross value of a development property, and not the profits arising from the development of the property. When a property developer with RM100 million in debt announces a RM300 million GDV project, it doesn’t mean it will earn RM300 million in profits to repay its debt. Instead, if the cost of developing the project is RM250 million, then his profit of RM50 million will be insufficient to repay its RM100 million debt.

Hence to use the GDV as the measure to repay one’s debt tells us the extent of Wee’s ineptitude, and desperation to defend 1MDB and Najib.

2. GDV does not equal Land Value

At best, if the Government of Malaysia succeeds in selling all of its land bank in Bandar Malaysia and TRX, we will receive proceeds valued between RM12 billion to RM15 billion. Even then, the sales proceed would have to deduct RM3.2 billion of borrowings inherited separately from 1MDB for these properties, as well as the multi-billion ringgit cost of developing the infrastructure for these projects.

3. Bandar Malaysia and TRX land sold to 1MDB for a song

Thirdly, Dr Wee seems to have forgotten the fact that these two parcels of land were "sold" to 1MDB for a song by the government. During 1MDB's control over them, hardly anything was developed. Instead 1MDB used these land assets to secure RM3.2 billion of borrowings which were immediately channeled towards the repayment and cover up of other 1MDB liabilities unrelated to the property development projects. Hence how in the world could Dr Wee and Najib claim credit for 1MDB being "beneficial and played an important role in the development of the country?"

Finally, even if both the Bandar Malaysia and TRX projects were able to repay all of 1MDB’s debts, which they can’t, does it in any way justify the massive embezzlement which has taken place in 1MDB? Is Wee arguing that it is alright to be the world capital of kleptocracy, as long as Malaysia owns sufficient assets to repay what was stolen by its leaders?

Will Wee to be Najib's next finance minister?

Malaysians are grateful the Pakatan Harapan government has found means to salvage certain assets previously belonging to 1MDB, to develop them to their full potential in the hope of generating as much returns as possible to help repay part of 1MDB’s debt.

The billions which could be earned from Bandar Malaysia and TRX could have gone towards the development of infrastructure and to improve the well-being of Malaysians. Instead, the proceeds now will go towards the repayment of more than RM40 billion in debts, including debts which have been paid with tax-payers' monies, because the 1MDB funds were embezzled by Najib, Jho Low and their merry men.

Dr Wee has not only not demonstrated no remorse for his part in the entire 1MDB mother-of-all-scandals under the Najib administration; he is now going all out to defend 1MDB and to justify the grand larcerny against the people of Malaysia.

Perhaps, the MCA President is hedging his bets that if BN were to win the next General Election in four years' time, Najib might appoint him as the finance minister?