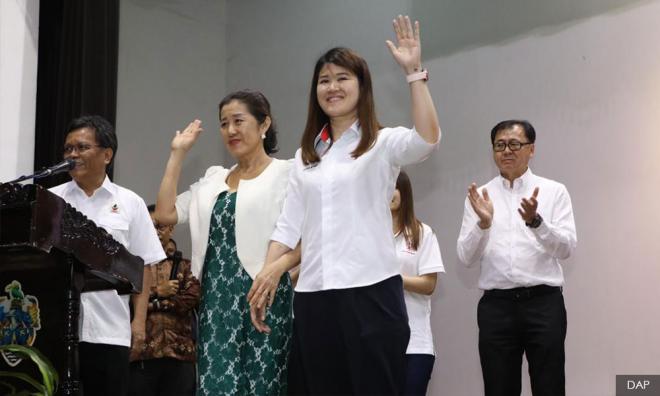 UPDATED | Pakatan Harapan will field Vivian Wong, 30, as its candidate for the upcoming Sandakan by-election.

Vivian is the daughter of incumbent Sandakan MP Stephen Wong, who passed away on March 28.

The announcement was made by Warisan leader Mohd Shafie Apdal during a press conference in Sandakan today.

Shafie said Vivian had a communications degree and had once served as her father's political aide.

"Warisan, Upko and Harapan parties will give their undivided support for this candidate.

"We are not taking any by-election lightly. We will work hard for a win," he said.

Warisan and Upko are not Harapan coalition members, but the two parties collaborate with the coalition at both the state and federal government level.

When asked to respond to allegations by opposition MP Khairy Jamaluddin that the Finance Ministry was taking credit for two projects in Sabah that was initiated by the BN government, Lim, the finance minister, was a bit taken aback.

"Why did he mention only two? I talked about 49 projects!" said Lim.

Lim also asked why the two projects didn't take off during the BN administration.

On Tuesday, Lim issued a statement to update Sandakan voters on the progress of 49 federal government projects in the Sandakan district.

Khairy had pointed out that two of those projects - the Sandakan airport upgrade and the Sungai Anip flood mitigation project - were initiated by the BN government back in 2015.

Referring to the airport project, Lim said the federal government had allocated RM20 million for work to be done this year.

"I will make sure the project kicks off this year.

"That's the problem with the previous government. They make announcements, but there are no results," he said.