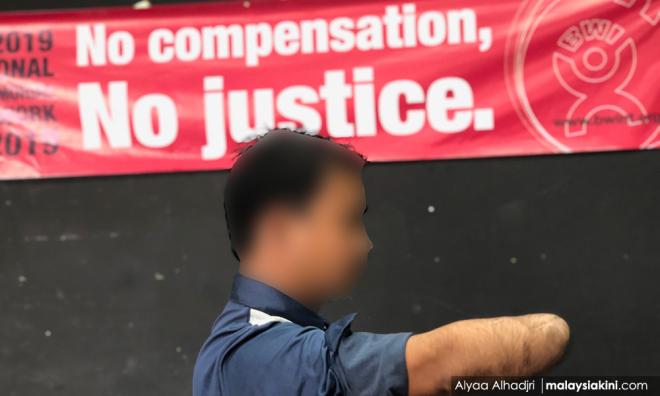 With just six months left before he is bound to return to Nepal, factory worker Krishna (name changed to protect his identity) has little hope of claiming unpaid compensation for an injury that led to his right forearm being amputated.

Though his employer paid for his hospital fees and his wages for the two months he could not work, Krishna said he is still owed RM17,000 in insurance claims for the incident, which occurred sometime last July.

"I have been working here for four and half years... when I go back to Nepal in November, I don't have any plans yet of what to do," said the 39-year-old father of two.

Admitting that he has little in savings, as most of his wages were sent home, Krishna said he was only informed that a human resource manager had "run off" with the insurance claims owed to him.

"Even if I get angry, nothing much can be done," said Krishna, who was present at the Kuala Lumpur and Selangor Chinese Assembly Hall for a function held by local trade unions to mark International Workers' Memorial Day.

In conjunction with the annual commemoration for dead and injured workers, the Building and Wood Workers International Malaysian Liaison Council (BWI-MLC) also released a report with several demands, including for Putrajaya to address such cases of unpaid insurance claims.

In 2018, BWI-MLC recorded eight deaths and 20 serious injuries involving Nepali workers in their industry, with no compensation paid to either the workers or their families back home.

BWI-MLC member Nor Azlan Yaakob (left in photo) said while they welcomed the government's move to extend protection under the Social Security Organisation (Socso) Employment Injury Scheme to migrant workers, issues of unpaid compensation owed under the previous Workmen's Compensation Act 1952 should also be addressed.

"Workers who remained working in the country after sustaining workplace injuries are also afraid to speak up and demand compensation due to their fear of losing their jobs," said Nor Azlan, who also serves as the general secretary of the Timber Employees Union of Peninsula Malaysia (TEUPM).

"And when their work permits expire, they are repatriated with zero chance of redeeming fair compensations owed to them.

"Normally, insurance claims will be made and paid (to employers), but the amount is withheld from the workers."

'All workers are workers'

"As a trade union, we see all workers as workers... documented or otherwise.

"We are still gathering more information to look for a solution that can, at the very least, provide their family members what is due," said the Waste and Maintenance Union general secretary.

BWI regional education officer S Vinothaa noted, meanwhile, that the BWI-MLC report – No compensation, no justice: Dead and injured migrant workers in 'new' Malaysia – only included official statistics from the Nepali Embassy, as the other foreign missions had declined to reveal requested figures.

Among its four recommendations include for Putrajaya to assume greater responsibility in keeping records of migrant worker fatalities or injuries.

In the event of deaths, it also recommended the government implement a cross-border system to verify payment of compensation to families in the workers' countries of origin.

Last August, Human Resources Minister M Kulasegaran announced that the Workmen's Compensation Act would be abolished so that local and foreign workers in the country could get equal protection under Socso.