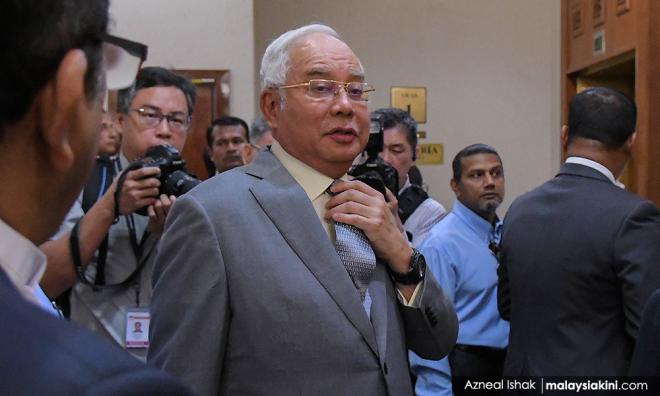 6pm - Thank you for following our live report today.

Court adjourns, to resume at 9am tomorrow

5.33pm - Today's hearing has ended. Proceedings will resume at 9am tomorrow.

Harvinderjit: In summary, money moved in and out between three accounts to cover overdrafts in accounts ending with 880 and 906, among others?

Prior to this, Harvinderjit went through several transactions between the three accounts from 2013 to 2015.

Harvinderjit reads out the contents of an alleged letter from Najib dated July 30, 2013.

"I convey to you (AmBank) the instruction to convert funds in the current account of US$620 million, and to remit the foreign currency in a single transfer of personal gift I received per the authorisation letter," the lawyer recites.

Speaking to Uma Devi, the lawyer then points out that there seemed to be inconsistencies between this letter and another letter that appeared to point to multiple transactions.

"Do you agree that it appears the bank had acknowledged this amount of money credited in the account was a donation and gift, and (that there was) a representation to the bank in 2013, ‘I am returning the unutilised portion back’?" Harvinderjit says, adding that this implies the money was returned to the sender.

Back in 2013, Najib was embroiled in a controversy surrounding a US$681 million (RM2.6 billion) donation, purportedly received from the late Saudi monarch, King Abdullah Abdulaziz Al Saud.

In that year, the then premier said he received the monies in his personal accounts in March 2013, just before the 13th general election.

He had claimed that the unused portion of the money, amounting to US$620 million, was returned to the Saudis.

During cross-examination by defence counsel Harvinderjit Singh, the witness says that this high-risk aspect is calculated by the bank based on its system’s criteria.

Harvinderjit: The bank does not have the prior transaction history of Gandingan Mentari?

Uma Devi: It (the high-risk assessment) could still be computed by the (AmBank) system.

Harvinderjit: What difference would it make if it is tagged high-risk?

Uma Devi: There would be more monitoring by the compliance department, which will constantly go through the accounts.

The witness added that the bank’s compliance department would implement monthly checks on the account.

11.20am - AmBank's relationship manager could not have asked employees in the bank's cheque processing centre to allow a cheque signed by an unauthorised signatory to be honoured, says AmBank Raja Chulan branch manager R Uma Devi.

She says this during cross-examination by defence counsel Harvinderjit Singh.

The lawyer is cross-examining the witness over seized bank documents and the authorisation of transactions within those files.

The documents were seized from AmBank’s Jalan Raja Chulan branch on July 6, 2015.

Harvinderjit: How is a cheque (related to one of the accounts linked to Najib's case), signed by a person not authorised by the bank, honoured by the bank? This is extraordinary.

Can an RM (Relationship Manager) have control over this, (for example) talk to someone in the cheque processing centre?

Uma Devi: No, as the person who ensures the payment goes through would be liable as a result.

It is unclear which cheque Harvinderjit is referring to from the transactions within the seized bank documents.

The witness also says that the account folders held by the bank are secure and cannot be tampered with, except by someone from the bank.

9.30am - Attorney-General Tommy Thomas, who leads the prosecution team, made a request to the court to set a timing for the hearing during Ramadan fasting month, which would start by next Monday.

Thomas (below) suggested to judge Mohd Nazlan Mohd Ghazali to have the hearing go on from 9am until 3pm and call it a day to allow those who fast to go home early and prepare for breaking of fast.

The AG also suggested to the court that the judge can call for short breaks in between.

Thomas: Would that be convenient with my lord?

Nazlan: What about starting earlier?

However, the idea of having a marathon session without a lunch break was objected to by defence counsel Muhammad Shafee Abdullah.

He told the court that the interest of non-Muslims who do not fast should also be taken into consideration, and suggested to judge Nazlan to set a 30-minute or 45-minute break to allow non-Muslims to have their lunch.

Shafee also said that the break time would be used for the Muslims to pray.

Shafee: We can finish at 3pm, that's not an issue. But we should not be pushing everybody not to have a lunch break.

The lawyer also told the judge that starting at 8.30am would also not be convenient for the defence as he cannot order his support staff to start administrative work before 8am.

Judge Nazlan then ruled for the hearing to start at 9am during the fasting month, and to end at 3.30pm to make up for the lunch break.

9.25am - Justice Mohd Nazlan Mohd Ghazali (below) dismisses former premier Najib Abdul Razak's application to strike out the seven charges related to the alleged misappropriation of funds from SRC International.

The judge rules that the accused has not been misled or prejudiced by how the seven charges were framed.

"It has not been shown how the accused, in any fashion, has been prejudiced by the charges.

"The prosecution has given documents to the defence.

"At this stage, nine days (of trial) has passed with 21 witnesses testified, with extensive cross-examination, with the applications for documents from witnesses that was allowed by this court.

"It is difficult to accept that the defence (accused) was misled by the charges," says Nazlan.

The judge also notes that any defect via omission or error of particulars in the charges are not at any stage to be regarded as material, unless it has been shown the accused had been misled.

9.19am - Najib enters the dock as proceedings begin.

8.48am - Clad in a light grey suit, former premier Najib Abdul Razak enters court and takes a seat in the public gallery at the front row to await the start of proceedings.

If convicted, the Pekan MP can be sentenced up to 20 years' jail, whipping and fine for the CBT charges; 20 years' jail and a fine not less than five times the amount involved or RM10,000, whichever is higher, for the abuse of power charge; and 15 years' jail and a fine up to RM15 million or five times the amount involved, whichever is higher, for the money laundering charges.

However, the trial, being presided over by judge Mohd Nazlan Mohd Ghazali, is taking a backseat to a ruling by the judge on whether to allow Najib’s application to strike out all of the charges, which is set to be delivered at 9am this morning.

On Friday last week, the same court had heard the application by the defence team to dismiss the charges due to Najib being allegedly misled by purported ambiguous wording of the offence in the charges.

The defence had argued that this had impacted the accused’s ability to understand what are the offences he is being charged with and impede his ability to prepare his defence, among others.

In the event that Nazlan dismisses the application, the trial will kick off today with the defence’ cross-examination of prosecution witness, AmBank Raja Chulan branch manager R Uma Devi.

Last week during examination-in-chief by the prosecution, the 21st witness testified on the purported money trail of millions of ringgit in and out of accounts linked to Najib’s case, over a period from 2013 to 2015, among others.

Her testimony was driven by a trove of documents seized from the bank in a Bank Negara raid on July 6, 2015.

On Thursday during cross-examination, Najib’s defence team grilled the witness over purported mismatched signatures on documents authorising millions of ringgit in transfer between bank accounts linked to Najib’s case, among others.