Prime Minister Najib Abdul Razak had returned US$620 million from the US$681 million (RM2.6 billion) that was channelled into his personal bank accounts as political donation, said attorney-general Mohamed Apandi Ali.

He disclosed that US$620 million was returned to the Saudi royal family in August 2013, two months after the last general election, because the sum was not utilised. This suggests that about US$61 million was presumably spent.

Apandi said he was satisfied based on evidence from witnesses and supporting documents submitted by the Malaysian Anti-Corruption Commission (MACC) that the original sum transferred between March 22 and April 10, 2013 was a "personal donation from the Saudi royal family given to him (Najib) without any consideration".

"MACC in their investigation, personally met and recorded statements from witnesses including the donor which confirmed the donation was given to PM personally," he added.

"I am satisfied there is no evidence to show there was a form of gratification given corruptly.

"Evidence obtained from the investigation does not show the donation was given as an inducement or reward for doing or forbearing to do anything in relation to his capacity as prime minister," he told a press conference in Putrajaya. 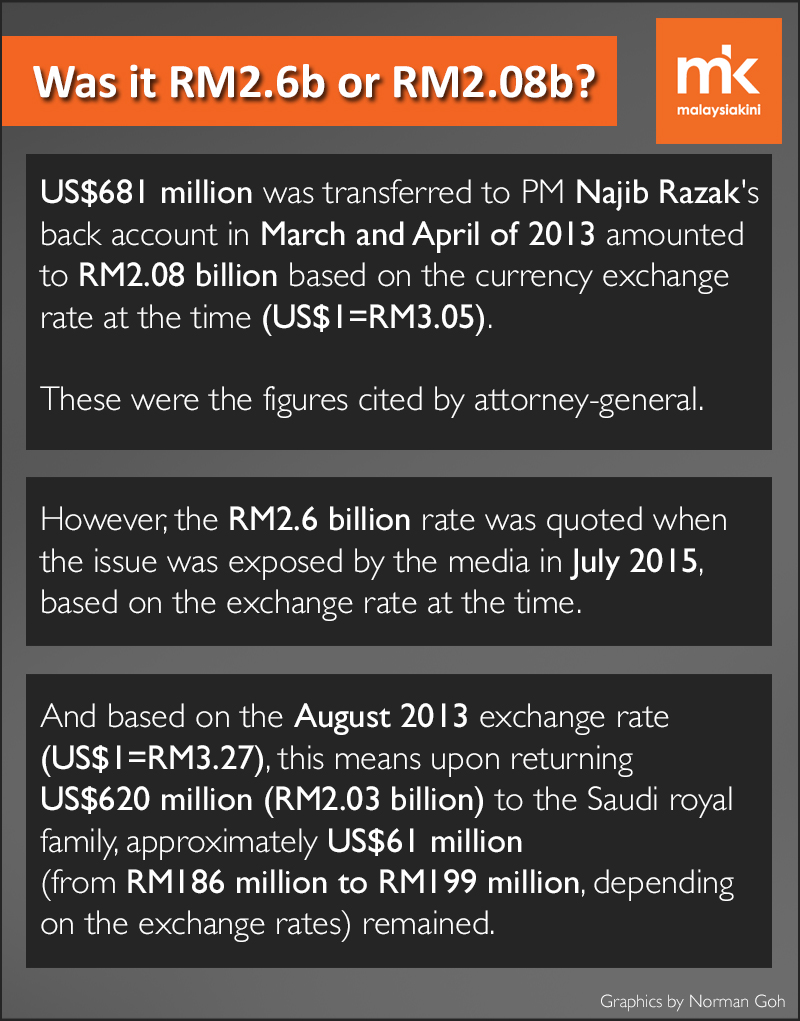 Apandi said since no criminal offence was committed, there is no necessity for Malaysia to make a request for mutual legal assistance to any foreign states for the purpose of completing the investigation.

Najib later denied he had abused public funds for personal gain, and described the sum as a political donation from a Middle Eastern source.

He also claimed that there is a plot to topple him using fraudulent allegations.

His detractors such as former prime minister Dr Mahathir Mohamad had dismissed the donation claim.

Editor's note: The US$681 million transferred to Najib in March and April of 2013 amounted to RM2.08 billion based on the currency exchange rate at the time (US$1=RM3.05). And these were the figures cited by the attorney - general .

However, the RM2.6 billion rate was quoted when the issue was exposed in the media in July 2015, based on the exchange rate at the time.

PM did not abuse power in KWAP's RM4b loan to SRC

Najib: Case closed, now we can move on

'Najib luckiest, most generous to get and return RM2.03b'