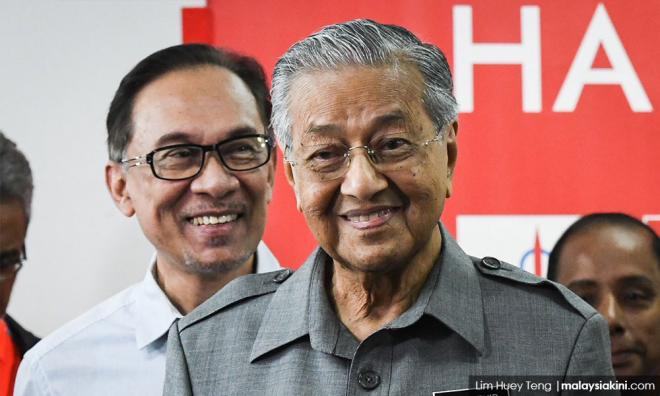 1. PKR president Anwar Ibrahim has backed Prime Minister Dr Mahathir Mohamad in Mahathir’s recent spat with the Johor royalty, saying that the prime minister has given a strong message that the Federal Constitution must be upheld.

2. Hackers have been targeting the smartphones of Attorney-General Tommy Thomas and several ministers since last week, a source told Malaysiakini, forcing Thomas to switch to a new phone number.

3. Inspector-General of Police Mohamad Fuzi Harun confirmed that a recent forum discussing the Rome Statute is being investigated under the Sedition Act 1948 after several police reports were lodged on it.

4. Acting Deputy IGP Abdul Hamid Bador is said to be among Mahathir’s top picks to become Fuzi’s sucessor, but there is lack of consensus on the matter in the police force.

5. Education Minister Maszlee Malik lauded the recent increase in matriculation intake as a historic ‘win-win’, but declined to say if it would result in stiffer competition for STPM holders.

6. At a dialogue session, Rembau MP Khairy Jamaluddin Abu Bakar said Umno cannot ‘defend the indefensible’ regarding its former president Najib Abdul Razak and the 1MDB saga, and admitted he didn’t expect to see his party bounce back after the last general election.

7. Election Commission chairperson Azhar Azizan Harun clarified that politician Lajim Ukin was appointed as an election observer for the Sandakan by-election as a representative of a government agency, not for his political links.

8. Agriculture and Agro-Based Industry Minister Salahuddin Ayub said the acquisition of the National Feedlot Centre will be finalised soon, after the ministry takes stock of its legal implications.

9. The Malaysian Anti-Corruption Commission has arrested a “Datuk”, who is a former special officer to a minister under the previous government for allegedly receiving kickbacks.

10. The US will reconsider its information-sharing with its allies who use Huawei’s 5G telecommunications equipment, a State Department official said.

kini roundup
Related Reports
Dr M: Perlis mufti 'deaf' to Harapan’s contributions to Islam
a year ago
No automatic citizenship for those born in M'sia - Muhyiddin
a year ago
867 reports lodged against speaker for allegedly insulting religion
a year ago
KJ: Najib can have 'bossku' but Umno can't defend the indefensible
a year ago