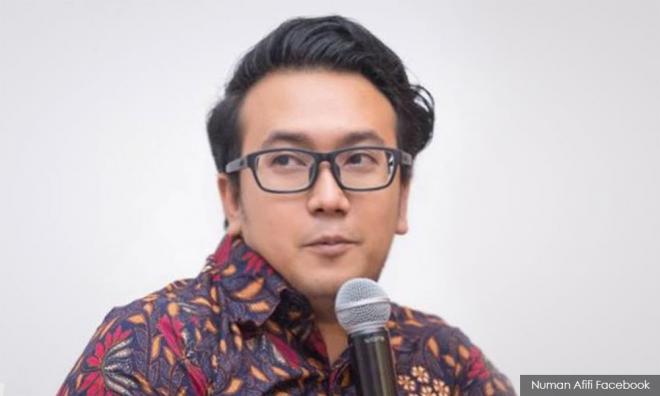 A leading Malaysian lesbian, gay, bisexual and transgender (LGBT) activist has accused the authorities of intimidation after a statement he read to the UN Human Rights Council led to him being questioned by police.

Numan Afifi (photo, above), an openly gay Muslim man and prominent advocate, travelled to Geneva last month to read out a statement from a coalition of LGBT groups to the Council for its Universal Periodic Review of Malaysia.

The 27-year-old was questioned by police for an hour in Kuala Lumpur last Friday, after an online backlash against statements given at the Council, which reviews the human rights record of each United Nations member state every five years.

"It was typical by the police," he told the Thomson Reuters Foundation. "They tend to intimidate human rights defenders - we've seen that with organisers of other causes too.

"This is a pattern by authorities... it is their tactics," said Numan, president of the Pelangi Campaign group, which seeks to raise awareness and advocate for LGBT rights in Malaysia.

"I will keep speaking out because this is about our lives in this country - we need to speak out against discrimination."

The Kuala Lumpur police headquarters was unable to give an immediate comment.

In the statement he read to the UN, Numan (seated centre, above) complimented the Malaysian government for backing recommendations on combating bullying in schools, a move LGBT campaigners believe could help protect the community.

But he expressed concern that it had not backed other anti-sexual discrimination recommendations that emerged from the review.

Malaysia's minister in charge of religious affairs decried the presence of LGBT groups at the march, calling it "an abuse of democracy".

The minister's statement came amid concerns over growing persecution of the LGBT community in the Muslim-majority Malaysia, where sodomy and other same-sex acts are outlawed.

In August, government officials ordered the removal of portraits of two LGBT activists from an art exhibition and a transgender woman was attacked, sparking public outrage.

One month later, two lesbians were caned for "attempting lesbian sex" in Terengganu, a conservative state in Malaysia's east.

"There is no engagement between the government - at state or federal level - with our community," Numan said. "Whenever they organise a roundtable with civil society organisations, they almost never invite LGBT groups... even where it affects us.

"By having dialogue and discussions with all stakeholders, we can find common ground to address discrimination."

Despite the current climate, Numan said an anti-discrimination law to protect LGBT people within the workplace and anti-bullying campaigns in schools were now achievable.

Numan worked in the communications team of the youth and sports minister in 2018, but was forced to step down after just one week after an online and media backlash.

"Because I was in the Ministry of Youth, they didn't want me to corrupt the youth - that was the narrative used," he said.

"I was upset and disappointed. I was one of the first openly gay men to be in a senior position in the government, so to receive this treatment was unfair."

lgbt
numan afifi
Related Reports
Evidence of state-sponsored discrimination against LGBT persons
a year ago
Cops summon LGBT activist for questioning over UN speech
a year ago
End violence based on gender and sexual orientation
a year ago
Cease probe against Women's March organisers, says lawyer
a year ago