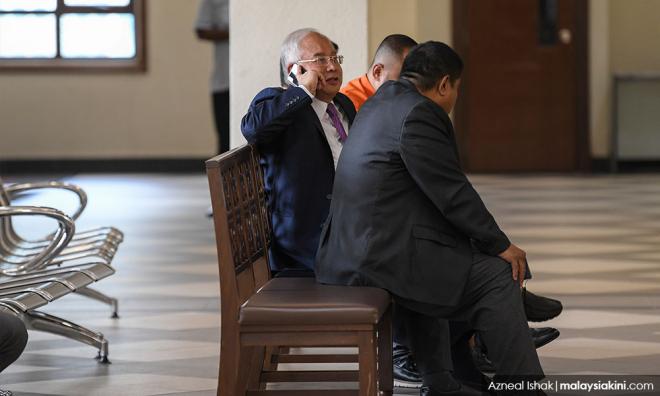 6pm - Thank you for following our live report today.

4.45pm - Amirul Amran Ahmat testifies that SRC International initially rejected the Retirement Fund Inc's (KWAP) request for further information on its business plans, among other matters, while applying to secure a RM3.95 billion loan from the latter.

The witness was vice-president of KWAP's fixed income department in 2011.

He tells DPP Ishak Mohd Yusoff that, in an email dated July 1, 2011, SRC International director Nik Faisal Ariff Kamil had said the required details could not be disclosed.

According to the email, this was because no prior approval had been given by then premier Najib Abdul Razak, who was also the chair of 1MDB's board of advisors at the time.

Amirul then reads out the content of the email before Justice Mohd Nazlan Mohd Ghazali.

"We are unable to disclose the further information requested, as the real estate projects are in the master planning stage of development.

"Disclosure of the detailed information requested is subject to approval of the chairman of the board of advisors and prime minister for which we have sought and have not obtained clearance to disclose thus far," Amirul recites.

The witness says that the response was in regard to an earlier email sent to Nik Faisal dated June 29, 2011, in which KWAP sought information related to 1MDB, the proposed guarantor of the loan, and SRC International.

He says other details sought comprised comprehensive information on 1MDB's existing investments, which included committed investments in the form of developments that were yet to commence, and its latest management accounts.

Amirul recounts the subsequent approval of the loan application, despite the lack of supporting documents. The final amount lent to SRC totalled RM4 billion.

Proceedings will resume before Nazlan on Monday next week.

The 39-year-old (photo) was the vice-president of KWAP's fixed income department at the time.

During examination-in-chief by DPP Ishak Mohd Yusoff, Amirul says that Najib had indicated his approval through a note, which he wrote by hand on a letter sent to him by SRC dated June 3, 2011.

The letter was an application by SRC International for a RM3.95 billion loan from KWAP for the purpose of "modal pusingan" (working capital) and unrestricted general investment.

In a witness statement read out by Amirul, he says the letter was addressed to Najib and signed by SRC International's director Nik Faisal Ariff Kamil.

"In the letter dated June 3, 2011, there is handwriting and signature of the prime minister at that time who was Dato Sri Najib directed towards the CEO (chief executive officer of KWAP) and stating 'Agree with KWAP giving the loan to SRC'," Amirul says.

He reiterates that the handwriting and signature belongs to Najib, as the witness was familiar with the then-premier's handwriting during his (Amirul's) time at KWAP.

SRC International was then a fully owned subsidiary of 1MDB, which itself was a company owned by the Ministry of Finance Incorporated.

4.10pm - The prosecution calls in its 29th witness, Amirul Ahmad, who previously served as an assistant to the vice-president of the Retirement Fund Inc (KWAP).

Amirul testifies that in June 2011, he received a letter from SRC International through the KWAP vice-president, who has since passed away.

The letter was an application for an RM3.95 billion loan from KWAP, he says.

He tells the court that the letter was signed by SRC International director Nik Faisal Ariff Kamil Nik Othman Arif Kamil, and was addressed to Najib Abdul Razak in his capacity as the then-prime minister and finance minister.

'Granting RM3b to establish SRC would be negligence'

Kamariah reveals that EPU could not afford an RM3 billion grant, as it would constitute seven percent of the RM42 billion development budget.

The letter from 1MDB for the grant, she says, was only three pages long.

Kamariah (photo) testifies that she handled a letter from 1MDB on Aug 24, 2010 seeking RM3 billion to finance SRC International.

She reveals that the letter first went through then-prime minister and finance minister Najib Abdul Razak, and says that this was "out of the ordinary."

1MDB claimed at the time that SRC International will invest in strategic resources such as minerals, energy and metals.

According to Kamariah, however, the EPU held that Petronas should handle energy matters, while the private sector should handle the iron and aluminium business.

Eventually, the EPU greenlights a RM20 million grant for SRC International to get started, she adds.

Judge Mohd Nazlan Mohd Ghazali then directs for proceedings to break for lunch and resume at 2pm, to allow the defence to cross-examine Kamariah.

11.40am - The RM1 million special allowance that Najib Abdul Razak received as prime minister was in accordance with the law, according to a witness.

It was only in May 2018, Zarina tells deputy public prosecutor Izzat Fauzan, that Najib made just RM6,627.09, prorated for his nine days in office.

His pay, she adds, was bumped up from the RM18,000 a month he received as deputy prime minister.

Najib's salary was deposited into his Affin Bank account.

10.30am - A moment of levity is seen in court as the rapid delivery of the 25th witness, Prime Minister's Department (Parliamentary Affairs) secretary Daman Huri Nor, forces prosecution and defence lawyers to ask him to slow down.

"Please slow down as we are trying to write it down. Thank you," Najib's lawyer Harvinderjit Singh (photo) says, before sitting down.

Taken aback, Daman continues his testimony at the same speed, prompting deputy public prosecutor Mohd Ashrof Adrin Kamarul to remind him that both the prosecution and defence cannot keep up.

The witness continues speaking rapidly, which causes the defence to calmly remind him to slow down yet again.

"Daman, usually you see Yang Arif listening to the story first, but the rest of us need to write.

"When you are testifying, please observe our hands as we write," defence lawyer Muhammad Shafee Abdullah reminds the witness.

Daman finally slows down, and testifies on various government appointments prior to the 14th general election.

10.08am - Clad in a dark blue suit, Najib Abdul Razak enters the courtroom and takes a seat in the front row of the public gallery.

The former premier also takes the opportunity to shake hands with a police officer in court as he waits for proceedings to begin.

Earlier, he attended a hearing before Kuala Lumpur High Court judge Collin Lawrence Sequerah in relation to his 1MDB trial.

This was in relation to the prosecution's bid to postpone the 1MDB trial, so as to avoid any clash with the ongoing SRC International hearing.

Attorney-General Tommy Thomas, who also attended the hearing before Sequerah, makes his way into the courtroom.

Sequerah had ruled that the 1MDB trial will commence on Aug 19.

Soon after, Najib's lead counsel Muhammad Shafee Abdullah joins the other members of the defence team.

The trial of former prime minister Najib Abdul Razak, involving the alleged misappropriation of funds from SRC International Sdn Bhd, which is being presided over by judge Mohd Nazlan Mohd Ghazali, is set to kick off at 9.30am.

Wedani, the 24th witness, confirmed Tuesday that a total of RM4 billion was transferred from the Retirement Fund Inc (KWAP) account to SRC International’s Ambank account between August 2011 and March 2012.

Relying on Rentas documents, among others, she said that RM2 billion was transferred to SRC International on Aug 29, 2011 in four transactions.

Another RM2 billion was transferred into the same account on March 28, 2012 in a single transaction.

On the same day, Nazlan allowed an application from the prosecution to begin proceedings at 9.30am today due to hearing at a separate court relating to Najib’s 1MDB trial.

The separate High Court, presided over by judge Collin Lawrence Sequerah, is set to hear the prosecution’s bid to postpone the 1MDB trial so that it will not clash with the current hearing.

Previously, the 1MDB trial was fixed to begin on May 14.

Habibul, a member of Najib’s inner circle, said the money was for “political defence operations, used (to obtain) political intelligence and political goodwill.”