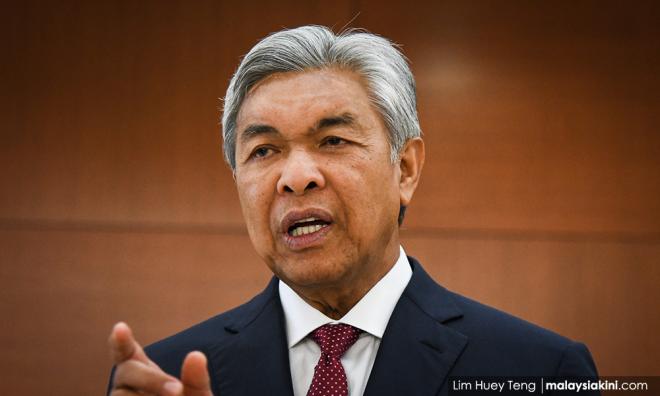 The High Court here today dismissed an application by former deputy prime minister Ahmad Zahid Hamidi, who is facing 47 charges of money-laundering, criminal breach of trust (CBT) and corruption, for the temporary return of his impounded passport to perform umrah.

After hearing submissions by both defence and prosecution, Judge Collin Lawrence Sequerah said the performance of umrah, although highly recommended during the fasting month, was not compulsory.

“In my understanding, there is no desperate need and there is no obligation to the applicant (Zahid) to perform umrah. Although the applicant has been performing umrah since 30 years ago, the situation and circumstances currently prevailing are very different as he is presently facing serious and numerous charges. Therefore, the court dismisses this application,” he said.

Earlier, Zahid's lawyer Hisyam Teh Poh Teik submitted that his client had to travel to Saudi Arabia between May 9 and June 3 to perform umrah.

Hisyam said that his client had no other intention as he is still a Member of Parliament and that his family members are still in the country.

“He will return the passport to the court the next day of his arrival in this country,” Hisyam said.

Ahmad Zahid was also present in the court today.

Another lawyer representing Zahid, Ahmad Zaidi Zainal said his client had never failed to annually perform umrah over the past 30 years, especially during the month of Ramadan.

Justice Sequerah: So, are you saying it is compulsory?

Ahmad Zaidi: No, but its highly recommended in Islam. He has never failed to annually perform umrah over the past 30 years.

Deputy public prosecutor Ahmad Sazilee Abdul Khairi objected to the application saying that it was not a desperate need to the applicant to perform umrah as the charges the accused were facing were serious.

However, the dates had been vacated for the trial of former prime minister Najib Abdul Razak, who is facing 25 corruption and money laundering charges involving RM2.28 billion of 1Malaysia Development Berhad’s funds (1MDB), which is scheduled to commence from Aug 19 until the first two weeks of November.

On Oct 19 and Dec 14 last year, Zahid pleaded not guilty to a total of 46 charges, comprising 11 charges of CBT, eight charges of corruption and 27 charges of money laundering involving millions of ringgit belonging to Yayasan Akalbudi.

On Feb 20 this year, he was slapped with another charge of CBT involving RM260,000 belonging to Yayasan Akalbudi.