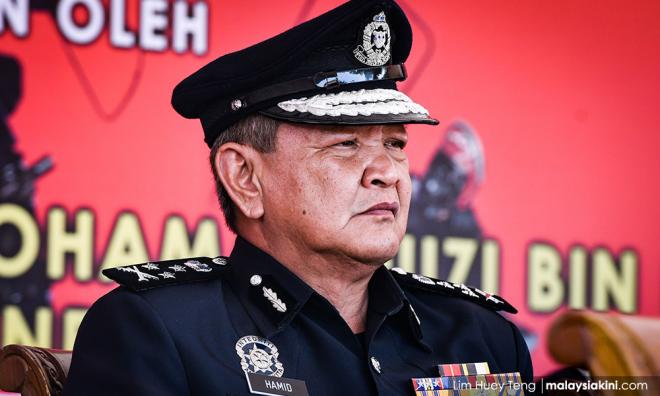 Yoursay: Can Hamid Bador return the police to glory days?

YOURSAY | ‘IPCMC is necessary to restore integrity and public confidence in the police force.’

Abasir: PDRM (Royal Malaysian Police) has the distinction of being everything a law enforcement agency should not be.

Over the decades, it has evolved from being known for petty extortion at roadblocks to custodial deaths, which at last count runs into the thousands, to enforced disappearances and human trafficking.

The despicable conduct of its IGPs (inspector-generals of police) has not helped either - one remembers the mattress carrier who was later rewarded with the coveted position, following which his suspected links with the underworld was much talked about; one recalls the one who justified the killing of a 14-year-old with tales of a machete after which was rewarded with the top job (and unfettered access to ‘Gopi’); and most recently, the fuzzy one whose headship of the SB (Special Branch) was distinguished by enforced disappearances of citizens as reported by Suhakam - after which, in keeping with tradition, he was duly promoted.

So yes, with its reputation in tatters and its creme de la creme not exactly known for exemplary conduct, no one should blame citizens for concluding that the force has gone rogue - a conclusion only reinforced by its concerted and orchestrated resistance against the IPCMC (Independent Police Complaints and Misconduct Commission).

Tidak Harapan: IPCMC is necessary to restore integrity and public confidence in the police force. Corrupt and incompetent police should be weeded out, not rewarded as in the past when they are friendly with the corrupt government.

Police is supposed to be independent and investigate impartially, regardless of the status of the criminals. Police cannot investigate themselves. It’s like asking Dracula to take care of the blood bank.

If the police enjoy public confidence, then those serving can hold their heads high. Honest police officers should be cared for and appropriately rewarded. Hopefully, the new chief can reverse the downward spiral of the police force.

Mission Accomplished: IGP Abdul Hamid Bador, your sole duty is to safeguard the safety of Malaysians and your ultimate responsibility is to adhere to the constitution of the nation.

In doing your duty, you must remain colour blind and in a multi-religious country like Malaysia, keep your personal religious belief to yourself. All stand equal in your eyes when performing your duty as a top cop. Equally, Malaysians will stand by you unconditionally.

I will not be too generous with my compliments since you have just started your journey, but I will shower you with endless compliments when you are at the last mile of your career and have done exceptionally well - restoring PDRM from a broken institution to a model institution that all Malaysians are proud of.

We are confident you are our man. Show us!

Anonymous_ bb046530: Hamid, may you bring back the days when the police stood for integrity, fairness and a force that the rakyat can depend on.

My respect for your statement about IPCMC. It must have taken a lot of guts to say so in today's environment. All our hopes are for you to succeed with flying colours.

Starwars: The new IGP is a level-headed gentleman and he appears to be a no-nonsense man. Let’s not forget Hamid was the only cop among the hundreds of thousands of police officers brave enough to speak up against then PM Najib Abdul Razak’s wrongdoings.

He did so in the best interest of this country. He wasn’t even bothered about his own position. The days of rogue cops are numbered. Let’s give him the support he needs to bring the force back in order.

Many other countries have police complaints authorities. So why is the Malaysian police force resisting the establishment of the IPCMC?

Roar For Truth: Indeed, PDRM cannot resist the formation of the IPCMC.

When it was first mooted in 2006, 12 years have passed by and your self-supervision has not given the public any confidence. Nothing has changed under the different IGPs that have served and retired.

They were working hand in hand with the politicians, each scratching each other’s back. They became untouchable even after so many wrongdoings were exposed. The public can only just stand and watch as each wrongdoing was swept under the carpet. Even criminals were having a field day.

By now, PDRM should realise that it is time to put its house in order. Do not let the frustrations and anger to continue to simmer in the hearts of the people. It is time to defuse the situation.

It is time to take positive steps and not some watered-down decisions to please both sides. The public are not that stupid as can be seen by their actions at the last elections.

Ravinder: Good, get the IPCMC going. The dignity and stature of the force can only be maintained when the acts and omissions of the force are subject to strict scrutiny by an independent body answerable to Parliament.

There have been numerous cases of deaths in police custody. What has been the result of investigations of the police by the police?

Whenever such a death occurred, the first thing senior police officers did was to declare it as "sudden death", instead of saying that a proper investigation would be carried out and a forensic post-mortem done.

Clean police officers have nothing to fear from the IPCMC. The police should actually be happy to have an independent body scrutinising them, and give them no job to do by being exemplary in their duties.

Ipohcrite: Yes, the new IGP is doing the right thing by leading the way to police reform. Support the IPCMC and make the police force a force the nation can be proud of.

It would also herald the start of a new regime with integrity and attract talented and honest personnel that the police force is now so bereft of.

Put the dark days behind us and go forward to embrace the bright shiny days.