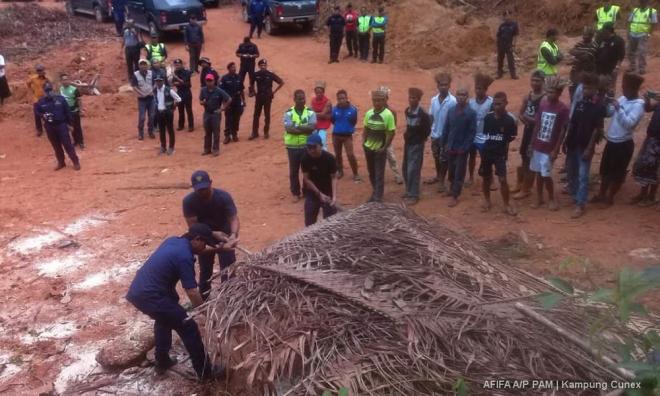 The Perak government has denied using heavy-handed tactics to dismantle a blockade set up by the Orang Asli community in Kampung Tasik Cunex in Gerik.

In a statement this evening, Perak Menteri Besar Ahmad Faizal Azumu dismissed as "baseless" claims that authorities brought along weapons when escorting loggers to send food to workers at the site in March.

"Investigations show that the authorities only brought the weapons for their own safety, and not to intimidate the locals," he said.

Offering a chronology of the dispute, Faizal said that Kampung Tasik Cunex was a splinter village from the Kampung Sungai Sarok Orang Asli settlement, which is in turn one of the seven villages under the Dala resettlement programme.

"The Dala resettlement programme comprises about 1,356 people. The locals live off rubber and forest produce," he said.

"However, due to a dispute with the Kampung Sungai Sarok village chief, 26 families, consisting of 74 men and 42 women, moved out of the Dala resettlement in early 2017, and encroached into the Air Cepam forest reserve, which is owned by the state government, and located about 5km away from the Dala Orang Asli reserve."

According to Faizal (photo), a logging company was then granted permission to fell trees activities in the Air Cepam forest reserve, after fulfilling all the necessary requirements.

This was later stopped by the Kampung Tasik Cunex villagers, who claimed that logging would contaminate their water catchment area, he added.

On the claim that the logging site was Orang Asli native customary land, Faizal said that that has yet to be sanctioned by the Perak government and the Attorney-General's Chambers, whose representatives visited the site after the dispute arose.

The menteri besar maintained that logging activities in the area are conducted according to set rules.

Faizal said that on April 3, 2019, the state government issued a notice for the villagers to remove the barricade set up on the logging road.

"To avoid confrontation with the locals, the logging company also opened up an alternative path to take out the logs, but even this was stopped by the villagers."

"On April 9, 2019, the Gerik District and Land Office put up a notice to remove the blockade in two weeks from the date of the notice," he said.

"The blockade removal was supposed to have been carried out by the office on April 23, but the logging company did it without the involvement of any government agencies.

"The locals then formed a human barricade to stop the logs from being taken out, but this was sensationalised by certain NGOs as bullying tactics against the Orang Asli," he added.

Faizal also noted that separate police reports have been lodged on the incident by locals and the logging company.

"After scrutinising all reports, the state government has decided that the removal of the blockade put up on state-owned land without permission is lawful.

"The removal was carried out this morning without incident."