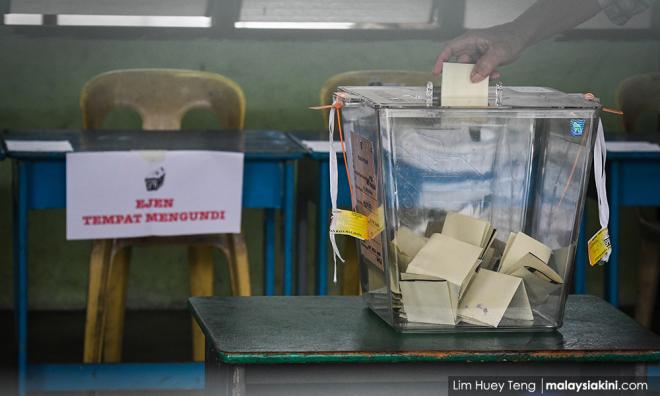 A number of police reports lodged by the Election Commission over alleged offences in seven by-elections are still being investigated.

These offences include holding ceramah without permits, putting up campaign materials in prohibited areas, and displaying ballot papers on social media, according to de facto deputy law minister Hanipa Maidin.

"Aside from that, the EC also lodged a report over the setting up of a pondok panas (election booth) and campaigning on polling day," he said in a parliamentary reply earlier this month.

"From the Sungai Kandis by-election to the Rantau by-election, the EC took action and lodged police reports against the offences that took place during the by-elections."

Hanipa (above) was replying to senator Isa Ab Hamid, who asked about the actions taken against the various offences committed in the by-elections held since last year's national polls.

The EC had on a number of occasions advised political parties to observe election laws and to not hold dinners, offer gifts, or abuse government assets during the campaign period.

Participants in the polls were also warned not to employ racial sentiments, or touch on religious sensitivities.

EC chief Azhar Azizan Harun had also noted his displeasure at the campaigning activities of both Pakatan Harapan and BN during the Port Dickson polls.

In his parliamentary reply, Hanipa also noted that a total of 87 investigation papers were opened by the police for alleged offences during GE14.

Only offenders in two of these cases, he added, have been charged in court thus far, with another case to be brought before court soon.

"A total of 36 cases were classified as 'no further action', while 48 cases are still under investigation, 23 of which have been referred to other agencies," he said.