This comes after a group of over 50 supporters from both parties were spotted attempting to canvas for votes from passing voters outside the polling station at Sekolah Kebangsaan Telok Kemang this morning.

Azhar, more commonly known as Art Harun, told Malaysiakini that he has instructed the Election Campaign Enforcement Team to disperse the supporters.

"I have directed our Election Campaign Enforcement Team to ask them to move more than 50 metres away from polling station entrance.

"They (supporters) are not allowed to campaign or fish for votes," he said.

The Election Offences Act 1954 prohibits campaigning and vote-fishing on polling day. It also prohibits loitering and the display of any campaign material featuring party logos as well as the candidates' names within 50m of any polling station.

In the incident this morning, a group of over 30 PAS supporters in green shirts could be seen waving party flags and holding signs painted with the party logo, less than 30m from the polling station.

They were also appealing to passing voters to vote for PAS' candidate Mohd Nazari Mohktar, by chanting Sokong Bulan!, Undi PAS! and Undi Hijau! (Vote the moon, vote PAS, vote green). The white full moon against a green backdrop is the party logo.

Not far away was a group of about 20 Pakatan Harapan supporters holding the coalition flags. Some were wearing red T-shirts bearing the Harapan logo, while others were donning uniforms with the PKR logo.

The police officials on duty at the polling station could be seen observing the ever-growing group of supporters.

"Under the law, there should be no more campaigning on polling day by all candidates or their parties. This will allow a cooling-off (period) for voters to decide who they want to vote for.

"Such activities are in violations of election law," he said. 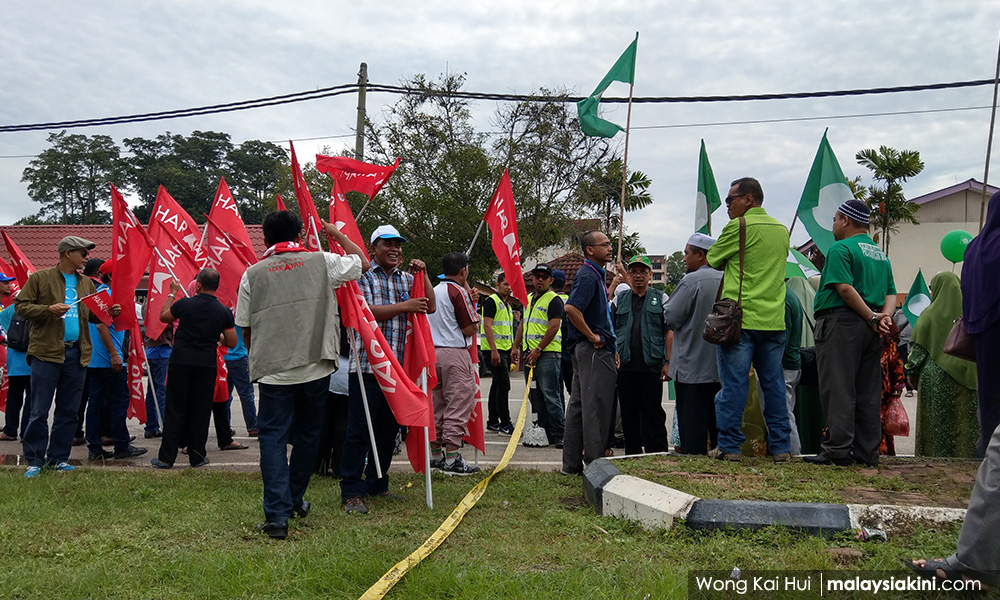 When met later at the school, an official from the Election Campaign Enforcement Team, Rozi Ithnin, said supporters would be permitted to remain across the road from the school.

He said that the 50-metre distance restriction varies depending on the location and topography of the polling station.

In the case of Sekolah Kebangsaan Telok Kemang, he said the ruling would be enforced on either side of the school, but not on the opposite side of the road.

A tape was then stretched out between the PAS and Harapan supporters to prevent any possible quarrel, and another tape was drawn across to prevent the latter two groups from crossing the road towards the polling station.

"This location is different from other places which are more isolated or not located by the road. This is the main road and some cars with the party flags can also pass by.

"We will only take action if they (supporters) create disruption," Rozi added.

When approached, Anwar, however, refused to comment on the actions of the Harapan supporters

Nazari, meanwhile, told Malaysiakini that it was up to the EC to decide on further action.

Malay support for Harapan increases as Anwar returns to politics