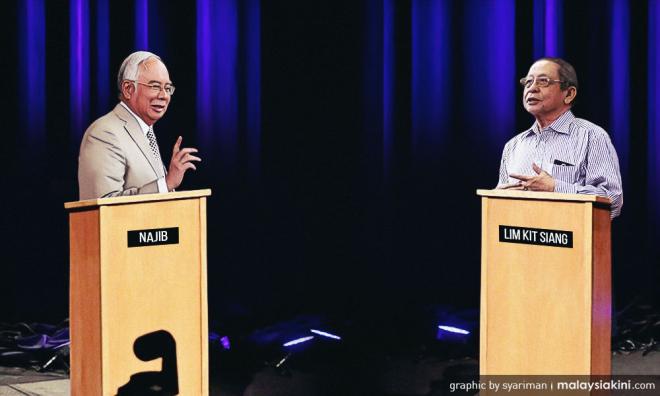 "Lim has agreed to debate with me. He proposed the following topic: 'How Malaysia became a global kleptocracy and how we can become a leading nation of integrity'.

"I accept the topic, but in fairness, we should also discuss other topics during the debate," he said in a statement posted on his Facebook page.

The former premier suggested that the debate be conducted live after Hari Raya Aidilfitri.

"My officers will contact Lim's officers to organise the debate," he said.

In an immediate response, Lim said he also had no objections to Najib's terms as long as the focus remains on his proposed topic.

"I have no objection to other topics being discussed at the debate but the subject of the debate must not be changed and must be clearly publicised as 'How Malaysia became a global kleptocracy and how can we become a leading nation of integrity' whether at the debate venue or elsewhere," said Lim in a statement.

Lim added he was appointing his political secretary Syahredzan Johan and parliamentary liaison officer Ahmad Faiz Mustafa to coordinate with Najib's officers to finalise the details of the debate after Hari Raya.

"Meanwhile, I welcome Malaysians who have views on the subject 'How Malaysia became a global kleptocracy and how we can become a leading nation of integrity' to email their views and suggestions to [email protected]," he said.

Earlier today, Lim (photo) said Najib had not responded to several serious allegations against him.

This was after Najib claimed that the DAP leader was obsessed with him, and suggested that it would be better if they debated.

"Najib accuses me of being obsessed with him. He cannot be more wrong," Lim had said.

"I would not be interested in him one bit if he did not have the dubious distinction of being the single Malaysian who had wrought the greatest damage to Malaysia, both to present and future generations, with his kleptocratic legacy.

"In the circumstances, should one debate with a kleptocrat, a pathological or habitual liar?

"Probably, the best subject for debate is 'How Malaysia became a global kleptocracy and how we can become a leading nation of integrity'. The ball is in Najib’s court."

Kit Siang proposes debate on kleptocracy, says ball in Najib's court
21 May 2019
Najib challenges Kit Siang to ‘freestyle’ debate
21 May 2019
Umno to amend constitution to oust Zahid, Najib?
20 May 2019
Kit Siang warns of campaign to portray DAP as out to get Maszlee
20 May 2019