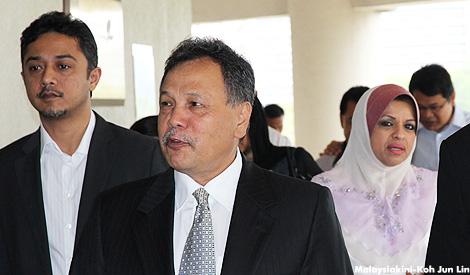 NFC chairperson Mohamad Salleh Ismail and his children – former CEO Wan Shahinur Izran and directors Wan Shahinur Izmir and Wan Izzana Fatimah Zabedah – were among the 11 defendants in the suit.

In the statement of claim, the government is seeking a court declaration that Salleh's family is personally liable for the debt repayment.

This includes the RM118.04 million allegedly misappropriated from the loan and secret profits arising from it, said the report.

The government is also laying claim to the properties bought using the RM250 million soft loan given to NFC in 2007.

The loan was to partially finance the establishment of a national feedlot centre in Gemas. The money was distributed in three tranches to NFC's bank account between January 2008 and March 2009.

Salleh's family had withdrawn RM180.51 million, and only RM8.32 million was paid to fund the feedlot project, while the balance of RM118.04 million was said to be misappropriated.

Shamsubahrin was acquitted and discharged on five counts of cheating Salleh in March.

The NFC project was meant to develop an integrated and sustainable beef industry to increase local beef production by 30 percent and reduce reliance on imported beef.

However, an audit found that the project was not meeting its targets, while Salleh was investigated and charged with alleged criminal breach of trust amounting to RM49.7 million.

He was subsequently acquitted of all charges on Nov 25, 2015.