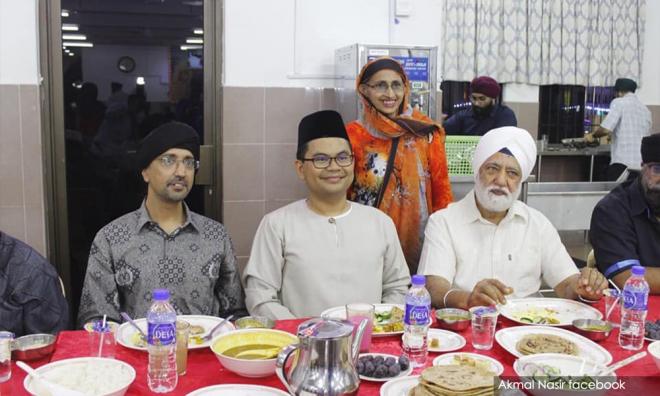 Yoursay: Yet another setback to our inter-religious effort

YOURSAY | ‘The JB parliamentarian is to be praised not admonished for efforts to unite the people.’

Mujahid: Breaking fast at non-Muslim houses of worship not wrong

David Dass: Some Malaysians - Muslims and non-Muslims - are making an effort at inter-religious dialogue and understanding.

We can choose to live together in peace and harmony, respecting each other despite our different faiths and traditions, or we can choose a path of religious supremacy that leads to stress and conflict.

But if God is real, then we must accept that He can resolve our differences in a nanosecond. He can bring knowledge and understanding of Him and His purpose to all of us by His slightest wish.

We can, therefore, surmise that that is not His desire and intent. He has given us all the intelligence and freedom that we need to reach a point of reconciliation and peace. We have to make the effort to reach that point.

That effort is not by conflict, wars and killing. But through love, compassion, forgiveness and generosity. The choice is ours.

Constitutional Supremacy: Johor Sultan Ibrahim Sultan Iskandar has stated that interfaith breaking of fast at the gurdwara (Sikh temple) was not proper.

Since it is breaking of fast, it will be Muslim prayers recited. How could they proselytise Muslims?

In fact, it is the non-Muslims who should be concerned about proselytisation.

It is such admirable acts by our leaders that are sorely needed today to check and reverse the alarming trend of deteriorating racial and religious relations in this country.

In fact, I would suggest to the present Pakatan Harapan government to map out and execute programmes to foster inter-racial, inter-religious understandings on a large scale as a core strategy to usher in our much dreamed New Malaysia.

The Wakandan: There is a great difference between a place of worship and a common hall where the gathering took place. There is little wonder why religious exclusiveness and bigotry is common even among the common people.

It is because the idea comes from the top hierarchy. Thank God, at least people like Mujahid still has a little bit of common sense left in his head.

Cogito Ergo Sum: Yes, the Johor Bahru parliamentarian is to be praised, not admonished, for efforts to unite the people.

There has been too much race baiting and religious intolerance as part of the efforts to bring a premature end to Pakatan Harapan. And it seems the royalty is part of that effort.

Abasir: Alright, Mujahid. Are you, as Harapan's de facto minister of Islamic affairs, ready and willing to educate "certain people (who) want to sensationalise religious issues, close-mindedness and racism?"

Are you willing to summon them to a re-education/rehabilitation camp to rid them of their deviant thoughts? For starters, would you name the "certain people", starting with those from the tip of the peninsula?

Hearty Malaysian: Increasingly, we see more “sensationalisation” of Islamic faith in this country, not only by many politicians to gain some mileage but now remarks from sultans.

Why is it so sensitive to have a meal in a hall beside a temple? Are the Muslims in Malaysia so weak in their faith that they can be influenced by meals shared with them, receiving zakat from other faith followers, apart from seeing lights that resemble a cross on a building?

Hopeful123: Opening the doors for more interaction and understanding will make the Muslims more knowledgeable about other faiths and beliefs. In the process, they will also realise that what is being preached and practised by a certain faith is not exactly what is in their book.

As long as they remain uninformed or misinformed, they can be used for the benefit of some influential parties for their own survival. In some forward-thinking societies, all different religions are encouraged to mix freely to understand one another's faith.

There is no need to fear if you know your faith well. After all, it is between the self and God. Who is the common man to decide who is religious and who is not?

Fair and Square: The Malaysia authorities may have a reason to restrict the buka puasa custom in other houses of worship. So, we as citizens should accept this for the sake of communal harmony and move on.

I hope the Johor Sikh temple is not blacklisted for gracing this event, which was organised with good intentions.

Vijay47: In these days when race and religion are being used to drive wedges between the communities in Malaysia, Mujahid’s undisguised comments are a comforting assurance.

One would have thought that Islam, any religion, would welcome efforts to build bridges between different beliefs and practices, the common goal being a return to the amity we once knew.

Thus, it is extremely distressing and disappointing that the very persons from whom guiding leadership is expected seem to adopt narrow-minded views that only serve to worsen the delicate relationships we somehow manage to still cling on to.

Far from being beacons that bind the various races, they constantly reflect care for only a particular race or attention to adherents of a specific faith when their concern should be more, much more universal.

To make things worse, they now seem passionate to introduce further strains between Muslims and non-Muslims under that perpetual cry of Muslims being under threat. Incredibly, they warn that events intended to create closer ties would confuse the Muslims and weaken their faith.

On the one hand, we have the Johor Bahru gurdwara bending backwards to properly accommodate the presence of Muslims. On the other, we have personalities perched in high places attempting to plant further distrust.

Obviously, they wish to achieve certain political changes that would take us back to the alarming days of the past.