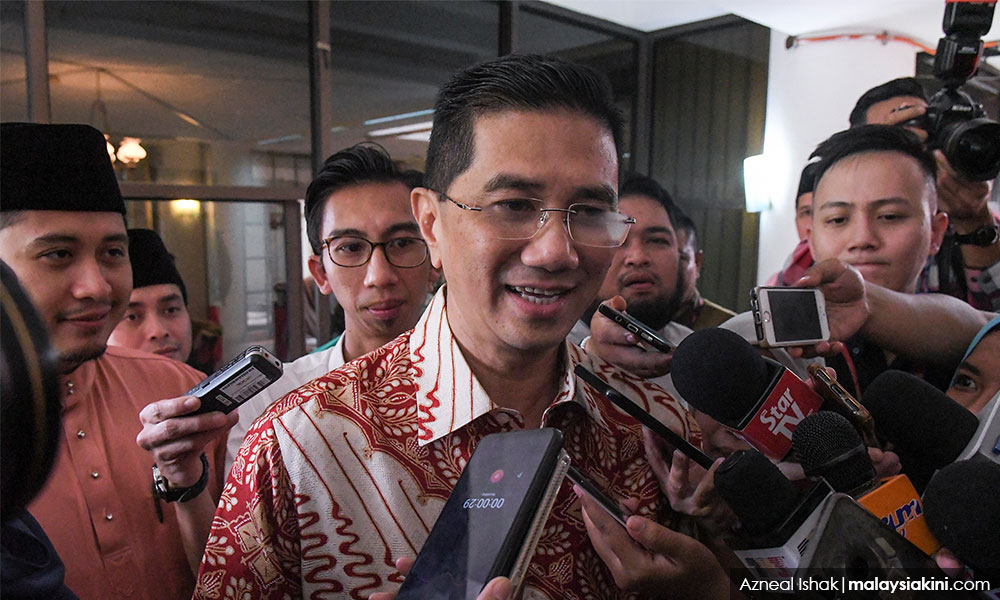 Yoursay: Should Azmin take leave until probe is completed?

YOURSAY | ‘It seems easy to demand that a minister go on leave. Just post a video and make a police report.’

LoveMalaysia2: I am disappointed with activist group Otai Reformis. They, of all people, should know that suspicious accusations are not a basis for the person involved to take leave.

This action would be more damaging to PKR than the allegations. They should condemn the smear campaign for what it is.

Kookie: Economic Affairs Minister Mohamed Azmin Ali only needs to go on leave if his continued presence on the job will interfere with or affect the independence of the investigation.

Otherwise, there is no reason for him to go on leave.

Anonymous #33227154: Yes, Azmin should take a leave of absence while the investigation into his case is ongoing. This is the right thing to do.

Other than the sex scandal video, another more serious allegation against Azmin is that of corruption, allegedly involving RM300 million. MACC needs to investigate this thoroughly and impartially.

It is precisely these kinds of cheap accusations which Malaysian politicians should not be cowed by, as they are the worst kind of political blackmail.

Imagine asking a politician to resign or take leave for a concocted cock-and-bull story.

P Pillai: It’s a bit hard to understand their logic - every time an accusation is made against a politician, the latter has to be placed on leave. Where will that leave the government?

All kinds of wild accusations can be made, with or without any evidence to back it up. The media then picks it up, followed by a social media frenzy – what a load of utter rubbish.

Kneazle: It seems easy to demand that a minister go on leave. Just post a video and make a police report.

In no time, all the ministers will have to be on leave if there are more of such videos being circulated accusing every minister.

It might come to a point when even our prime minister will be the victim. With modern technology, everything is possible.

Is he covering up something?

Clever Voter: There are enough cyber laws to nab those mischievous people behind the so-called sex scandal.

Firstly, having pre-recorded video is not new. There are technological advances which can produce fake stories.

Today, technology can enable the creation of fake interactive videos which can look very real. What has been produced is less sophisticated. What is needed is to find the source.

The people who propagated this should all be locked up and eventually, they will spill out the truth.

Rule of law helps but the authorities have to be many steps ahead.

Vijay47: This "Sex Tapes - The Return" issue is so bad that it could actually be good.

This is a classic opportunity for the government to show that they are, as the chief of the Parliamentary Select Committee (PSC) on Major Appointments William Leong would say, impartial.

Investigate the matter thoroughly and some heads must roll – the corruption accusation, the makers of the tapes, and the stars involved, though I disagree that what consenting adults do in a bedroom is anybody else's business.

Rembrandt: Someone is trying to destroy PKR by creating suspicion and trust deficit among party leaders.

Pit Anwar against Azmin, or Azmin against Anwar, and PKR will be so disunited, it will break up and that will be the end of the party.

I hope the leaders realised this and not fall into the trap. This is all the more reason to band together as one strong force and fight whoever is doing this.

Roger5201: Firstly, whoever created the WhatsApp forum to propagate this video has probably breached the Personal Data Protection Act 2010 and should be charged with breaching privacy and spreading ‘fake news’.

Thirdly, Haziq admitted he was the man in the video – he should be tried in a Syariah Court for sodomy and slander since the evidence does not check out.

Abasir: Indeed, they are well-funded and organised.

They also have a great casting director with the ability to pick a winsome "star" who, for once, is also articulate in English and, what do you know, a lawyer to boot – no coffee boy or driver for this lot.

And the technology... wow!

The Special Branch must get to work to catch the mastermind and get to the bottom of this. Our politics is at such a low level.

Proarte: Fahmi, the only reason why all this is an issue is because what Azmin purportedly did is still a crime in Malaysia. This, for me, is the crux of the issue. Whether it was a well-funded sting is irrelevant.

Does Fahmi believe such a law is relevant in the modern democratic world which espouses human rights and dignity? This law has done nothing but damaged the moral fabric of governance in Malaysia.

If Mahathir had not sacked Anwar by riding on the back of Section 377A, we would have been spared the untold damage to our nation by the world's greatest alleged kleptocrat, Najib Abdul Razak.

Will Fahmi be calling for the repeal of Section 377A, as it has no useful purpose and is against basic human rights? Maybe when the proverbial pigs fly.

yoursay
sex video
Azmin Ali
Haziq Abdullah Abdul Aziz
Related Reports
In Penang, Azmin continues to prod PKR leadership on sex videos
a year ago
'Who gave the contact info?' Azmin wants explanation from PKR leaders
a year ago
Answers to the sex video conundrum found?
a year ago
Anwar denies he and his supporters behind sex video plot
a year ago