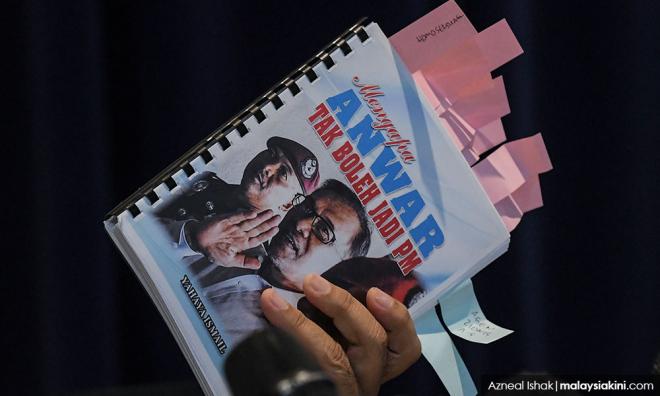 Anwar leaves it to the police to investigate 'blackmail' threat

PKR president Anwar Ibrahim said he would leave it to the police to take appropriate action against author Yahaya Ismail, who threatened to publish a book disparaging Anwar, if he was not paid RM400,000.

Confirming that he had received the threat from the author of the book titled 'Mengapa Anwar Tak Boleh Jadi PM' (Why Anwar Cannot Become PM), the Port Dickson MP said a police report on the matter had been lodged yesterday against the writer by Kedah PKR Leadership Council chairperson Johari Abdul.

Anwar was speaking to reporters after attending a Hari Raya Fellowship Dinner organised by the Malaysia-India Business Council (MIBC) in Petaling Jaya last night, which was attended by some 200 guests.

“The person who wrote this… was paid, was hired and the time has come for this writer to be known among the public, to be investigated and for appropriate action to be taken,” Anwar said.

At an earlier press conference in Petaling Jaya held after the conclusion of the PKR Political Bureau meeting, Johari said he had received the manuscript of the book on June 10, and lodged the report because the book was defamatory towards Anwar.