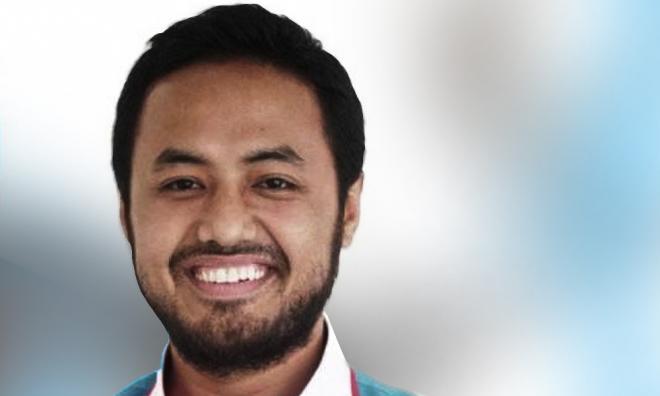 He said he was unsure whether the videos were real, but believed that one of the two men engaging in sex acts looked like Azmin, who is also economic affairs minister.

"This is my personal opinion... I think when the first video came out, I had my doubts. It's not so clear.

"The second one, I would have to say, looks like him. I won't say whether it's real or fake, but it does look like him," he said in an interview with The Star.

Azmin was implicated after Santubong PKR Youth chief Haziq Abdullah Abdul Aziz admitted that he was one of the men in the videos, which were circulated to the media and party members last week, and claimed the Gombak MP was his partner.

Azmin (below) denied the claim, stating that it was character assassination intended to end his political career.

However, Farhash has also found himself being implicated in the scandal after there were suggestions that he was involved in creating the videos.

Farhash said the allegation was started by blogger Raja Petra Kamaruddin who suggested that he was with Haziq at the Kuala Lumpur International Airport (KLIA) when police arrested the latter on June 14.

Farhash said he was at his office in Petaling Jaya when Haziq was arrested, adding that the manner in which Azmin responded had fuelled the rumour.

"I had to pull up my CCTV recording of where I had been, just to prove that this thing has been blown out of proportion, with people now thinking that I'm part of this whole 'sexpionage'.

"But most of it is just a way to deflect attention. Azmin didn't really say it but the way the media was asking the questions and the way he answered them implied that I am behind the sex video, which is a ridiculous accusation without any proof," he was quoted as saying.

On July 18, Azmin had said he was convinced the sex videos were an inside job after Farhash allegedly went missing.

Farhash, who is also the Perak PKR chief, broke his silence on the same day, denying any role in the sex video and asked Azmin to resign if he were "guilty".

Anwar (below) later reprimanded Farhash, stating that he disagreed with the aide and asked that he use proper party channels to air his views.

In the latest interview, Farhash said people were targetting him as it was an indirect way to get to Anwar.

"I'm one of the many scapegoats in this whole intrigue. But I think it's not that they're really after me.

"You see, I represent my president. People who are trying to attack him don't dare attack him directly so they attacked me," he was quoted as saying.

He stressed that Anwar, who is increasingly said to be having differences with Azmin, is not responsible for the sex videos.

Farhash also stood by his statement despite Anwar's reprimand.

"I think it's very fair because he doesn't want the public to think that whatever I say echoes what he thinks.

"I'm my own person. Although I am his political secretary, I'm also part of the party leadership. I lead Perak PKR as the chairperson. So I'm entitled to my own views," he added.