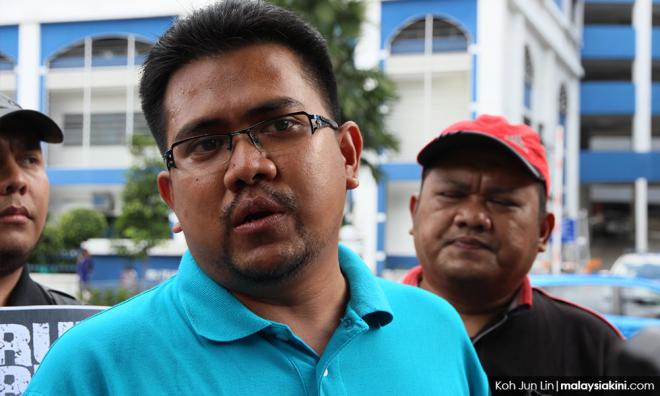 Syukri ticks off Zuraida on suggestion to fire Haziq

PKR vice president Zuraida Kamaruddin has come under fire for suggesting that she would have immediately sacked Haziq Abdullah Abdul Aziz, who made allegations of sexual impropriety against a senior party leader if she was the party president.

PKR Youth secretary Ahmad Syukri Che Ab Razab (photo, above) noted that her statement came after the PKR political bureau, of which Zuraida was part of, decided to first issue a show cause letter against the Santubong PKR Youth chief.

"The fact is, Zuraida was part of the PKR political bureau, which unanimously agreed with the decision with regards to Haziq.

"If she was involved in the decision during the meeting but later decides to publicly belittle it, then it shows (her) discipline is of poor quality," he said in a statement today.

Syukri said as a party that values justice, the PKR political bureau was allowing due process so that Haziq can give an explanation before further action is taken.

"Don't become emotional and act on your own whims so much that Zuraida forgets this fundamental principle.

"It is inaccurate to say that the party has apparently failed to act when the action has only just been initiated.

"Therefore, I urge Zuraida to remain calm and respect the party's decision. Every leader has the responsibility to show a good example to party members," he said.

Syukri also stressed that the decision is not solely by PKR president Anwar Ibrahim but was done through consensus by the political bureau.

After a sex video showing two men engaging in sexual acts was circulated by anonymous numbers on Whatsapp, Haziq emerged to claim that he was one of the men in the video and his partner was PKR deputy president Mohamad Azmin Ali.

Azmin had dismissed the allegation as character assassination intended to end his political career.

Zuraida, a key Azmin ally, said Haziq was lucky that she was not the PKR president.

"If I was the party president, I would have sacked him already.

"I asked the party to fire him but it wanted to follow due process, then so be it," she had told journalists in Putrajaya earlier today.