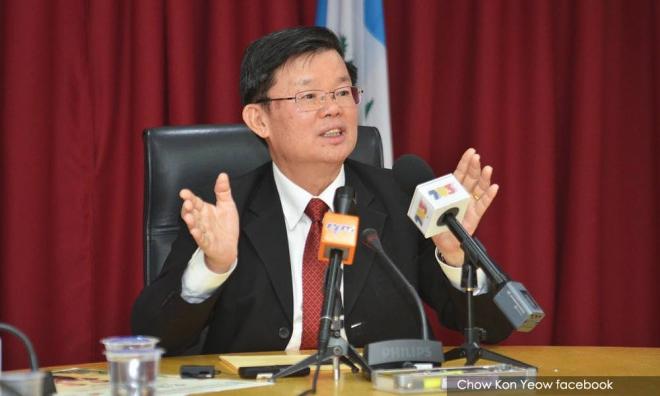 Chow Kon Yeow today issued a stern rebuke against a news portal for the "factual errors and reckless assumptions" in its report on the Penang South Reclamation project.

The Penang chief minister said The Star report headlined "Penang gets nod to develop islands" misrepresented the PSR project to the public.

"Since the information is not from an authorised source, the state government shall not bear any responsibility for the misinformation contained in the article," he said in a statement.

The Star reported that Penang had secured approval on the environmental impact assessment (EIA) report for the PSR, paving the way for the three artificial islands totalling 1,800ha to take shape.

Read more: Penang yet to agree to compensate fisherfolk affected by PSR

Forty-six local NGOs – including Penang Forum, Consumers Association of Penang and Sahabat Alam Malaysia – have signed a petition calling for the PSR to be scrapped, as they claim it negatively impacts the sea and the livelihood of the fishing community in the area.

In his statement, Chow said the Penang government is still awaiting official notification of the EIA report being approved.

"The state government has been working diligently with various parties to obtain the necessary approval in compliance with the process and the approval, once obtained, will give the stimulus to get on with the job," he said.

"Once the official letter of approval reaches us, the conditions of the approval will be made known to the public accordingly, as any responsible government which believes in transparency would do.

"When the EIA approval is obtained for the PSR, a detailed design will then be worked on before tenders are called in the first half of 2020."

Chow also noted that the information contained in the report was "incorrect."

"Details are being worked out and will be shared with the media and stakeholders when they are ready."

The PSR is slated to help fund Penang's RM46 billion Transport Master Plan (PTMP). This includes an undersea tunnel linking the island to Butterworth, as well as a light rail transit system from Bayan Lepas to Komtar.