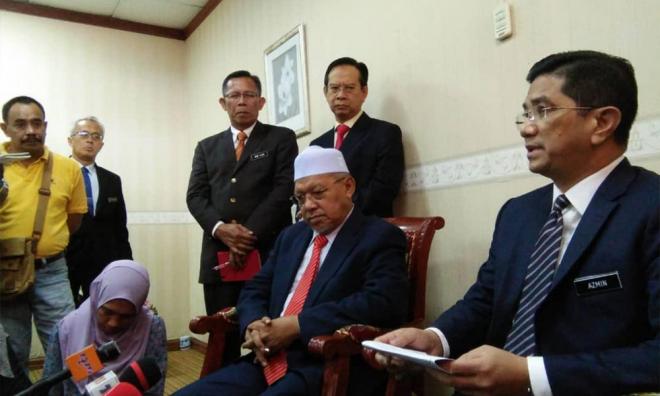 The Kelantan government's decision to withdraw its lawsuit against the Federal government and Petroliam Nasional Berhad (Petronas) over oil royalty claims shows the spirit of federalism between the state and Federal governments, says Economic Affairs Minister Mohamed Azmin Ali (above, right).

He said the Federal government thanked the state government over the move, and expressed its willingness to resolve the issue in an amicable manner, for the benefit of both parties.

"On behalf of the Federal government, we thank the Kelantan state government for taking the initiative to withdraw the suit on June 28, and it (the process in court) has now been settled.

"It opens up a strong space for forging the spirit of federalism between Kelantan and the Federal government as aspired by Prime Minister (Dr Mahathir Mohamad) who wants to see the establishment of a conducive atmosphere," he said.

Kelantan Menteri Besar Ahmad Yakob (above), who is also MTNg co-chairman, was also present at the press conference.

On June 28, the High Court ruled that the dispute over oil royalty between the Kelantan and the Federal governments was deemed settled after the state government retracted the lawsuit it filed nine years ago through a notice of termination.

High Court Judge Ahmad Bache then dismissed the lawsuit without any order in relation to costs.

Commenting further, Mohamed Azmin said the Federal government would settle the royalty payments with Kelantan as soon as all related matters were settled.

Ahmad, meanwhile, said the Kelantan government had fulfilled all the conditions to claim the royalty payments due, and was confident the state government would begin enjoying the royalty soon.