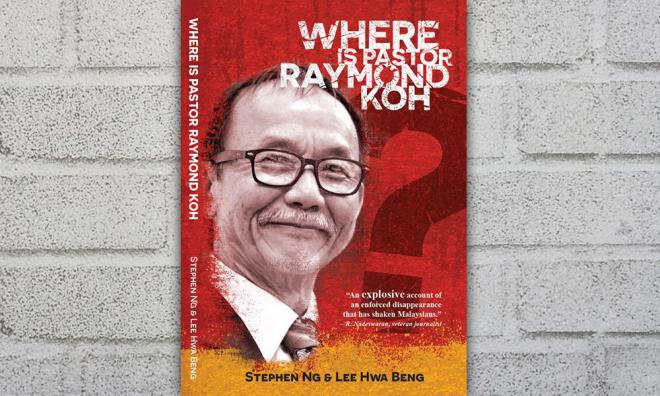 Why a book on missing pastor? To pressure the gov't to seek the truth

COMMENT | I believe the question on everyone’s mind is why the book Where is Pastor Raymond Koh? was written.

As mentioned in the book, it is to remember Koh. We sincerely hope he will reappear one day, but if he doesn't, the world must not forget him, especially the way he was abducted by the police as concluded by the Suhakam inquiry panel.

I have personally known him for no less than 25 years, and his disappearance really affected me a lot.

This book was also written to let the public know how Koh was abducted by the Special Branch, as well as how they responded publicly and in the Suhakam hearing when confronted.

Why did they do it and who gave the order? Unfortunately, the Suhakam inquiry didn’t tell us why, but the book does try to explain in the best way possible so as not to fall on the wrong side of the law.

Buy the book and draw your own conclusion.

To me, the ultimate reason the book was written is to allow the public to pressure the government of the day to seek the truth of the abduction of Koh and keep the perpetrators accountable.

The state-sanctioned abduction took place during the under the previous BN government. Now a new government led by Pakatan Harapan is in power.

We eagerly looked forward to them finding the perpetrators of this abduction since the date we voted them into power, on May 9, 2018.

After all, a lot of their leaders, before they were in power, were very supportive of our struggle to seek the truth, including quite a few of them who attended our many candlelight vigils.

Sadly, nothing has been done to date.

The special taskforce announced by the home minister was to investigate the disappearance of another abductee, Amri Che Mat, and not Koh.

The reason he said the government cannot investigate Koh’s disappearance is the ongoing court case of his so-called kidnapping.

The Suhakam inquiry panel had decided that it was not a case of kidnapping, but a case of extortion.

The then-inspector-general of police, Khalid Abu Bakar, also confirmed that it was not a kidnapping during the inquiry. Why then does the home minister still consider it a case of kidnapping?

That is why this book is important. We want the world to find out the truth themselves.

As I say in the book, we cannot expect the few on the top to follow up on the case. It is up to us the people to pressure them to act.

Being a former politician, I can say public pressure is the only way the truth of Koh’s abduction will come out.

This is the second book I co-wrote. In my first book, PKFZ: A Nation’s Trust Betrayed, I had hoped that public pressure would bring the culprits to justice. It did as quite a few were charged in court, although none were found guilty later.

Similarly, I hope this book will lead to the truth of Koh’s abduction.

After all, in the New Malaysia that we voted for, justice must prevail. Truth and only truth can set our beloved country towards a New Malaysia!

All proceeds of the book will go to the family of Koh.

Excerpt of speech delivered by co-author LEE HWA BENG on the launch of Where is Pastor Raymond Koh? on July 3.