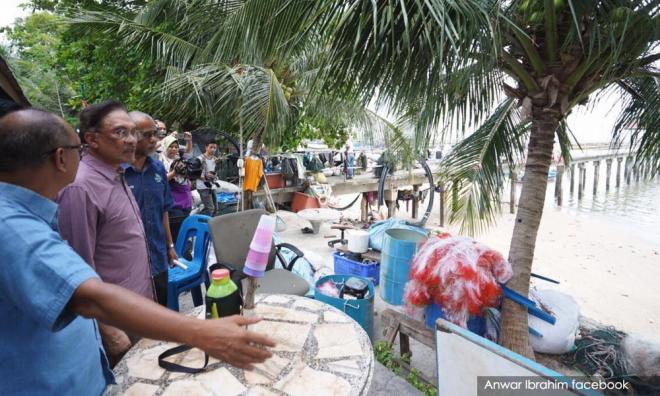 Anwar's meet with fishermen on PSR slammed as 'sandiwara'

Gerakan today dubbed PKR president Anwar Ibrahim's meeting with fisherfolk over the Penang South Reclamation (PSR) project as mere "sandiwara (drama)," instead of a move to genuinely help the community.

Speaking to Malaysiakini, the party's deputy president Oh Tong Keong claimed that there was a lack of sincerity in what Anwar said during the meet.

According to Oh, Gerakan representatives who attended the talk said the PKR leader failed to convince the fisherfolk that their interests would be taken care of with the implementation of the PSR.

"Anwar appeared for about 30 minutes only, and did not spend much time with the fishermen," he said.

"Anwar should have at least given his assurance that when he becomes the eighth prime minister, he will review the project. That would have made us feel he is really sincere in wanting to help the fishermen."

During his speech to the fisherfolk in Permatang Damar Laut on Saturday, Anwar lamented that "I do not know of a single area in the world with big reclamation projects where the fisherfolk’s welfare was preserved."

He said, however, that there may have been technological advances that could change this.

Anwar told the fisherfolk not to stubbornly insist on the project’s cancellation before discussions, but said he would not tolerate vague answers from the government on how they plan to protect the community's welfare.

The meeting came after 200 fisherfolk marched to Parliament on July 11, demanding that Prime Minister Dr Mahathir Mohamad cancel the project.

In an immediate response, Chow said the Penang government had briefed state assemblypersons on the PSR, which involves the creation of three artificial islands covering 1,821ha of land.

If necessary, Chow added, the state government would also arrange for a briefing for parliamentarians.

In a series of tweets yesterday, Penang exco Dr Afif Bahardin reiterated that the engagement process with fisherfolk began in 2016.

This was a direct rebuttal to some fisherfolk claiming that the state government had avoided meeting them for four years.

"The fisherfolks directly affected by the project were engaged in such talks. So far we have organised some 4,733 sessions," said Afif (photo), who heads the PSR Fishermen Taskforce.

Since 2016, Penang has set up two one-stop centres for fisherfolk to obtain the latest updates on the PSR, which is being developed to fund the state's RM46 billion Penang Transport Master Plan.

"These centres were built in the fishermen's villages, and open to the public, where anyone can get information or share their views and ideas about the project," Afif said.

The exco said such engagement sessions were held to obtain the best views and solutions when preparing the environmental impact assessment report for the project.

He added that the state government had identified the concerns of the fisherfolk in the time since, and that many of them are now more positive about the project.

"But this does not mean we will be complacent, Instead, we will work to strengthen our resolve, and with progressive wisdom to improve the lives of the fisherfolk," he said.

Afif pointed out that Penang has been transparent about the project, noting that the last meeting with representatives from the fishing community was on May 31.

During this meeting, representatives handed over their ex-gratia demands to Chow, who revealed the matter to the press last week.

"The Penang government only received the approval for its EIA report on July 4, and the taskforce has been directed to begin discussions about ex-gratia payments with the fisherfolks.

"Please give us some space to discuss and to ensure the PSR development is in line with the Penang2030 vision for a smart, green, and friendly state," he added.