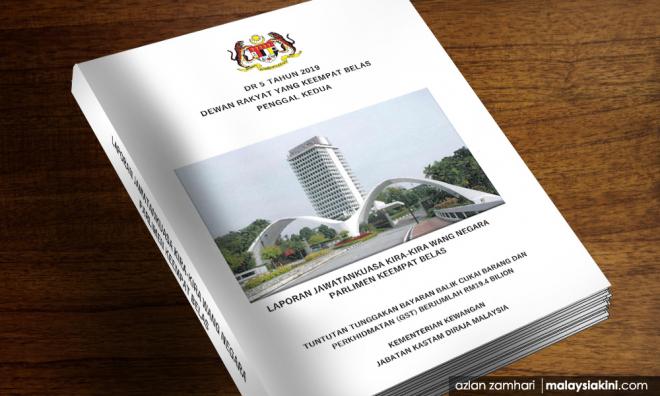 Yoursay: However one spins it, the diversion of GST refund money is illegal

YOURSAY | ‘If no money was missing, why did the gov’t had to get a Petronas bailout?’

Vgeorgemy: Public Accounts Committee (PAC) chairperson Noraini Ahmad's summary of the committee’s report does not mention the illegality of the diversion of Goods and Services Tax (GST) funds as mentioned in the attorney-general’s legal opinion attached to the PAC report.

Without any hesitation, we could say the diversion of funds was not in line with Section 52(2) and Section 54(5) of the Goods and Services Tax (GST) Act and is a textbook case of state capture of citizens’ property without adequate compensation.

Regrettably, the PAC chairperson played politics on an essential aspect of the case – the state capture of citizens’ wealth by the Najib Abdul Razak regime without any compensation.

We hope Dewan Rakyat will address the AG’s concern in detail during its current sitting.

Kita Orangbiasa: "GST revenue that was not transferred into the GST Trust Fund was used for operational and development purposes," said Noraini.

Noraini, the money is meant to be refunded to rightful owners - taxpayers. It cannot be used for the purpose other than what is it rightfully meant for.

It was misappropriated, as simple as that. Don't try to defend this type of nonsense.

The Wakandan: It is the BN/Najib practice of twisting the law so that they can use the money according to their whims and fancy instead of its true purpose.

Then, they say nothing is lost or stolen, the money was just being used differently. They did not care about the law.

Yet Umno leader Lokman Adam Noor accused Pakatan Harapan of using the law of the jungle. So what law did Najib use?

Ipohcrite: I think maybe the word "robbed" was inaccurate. Perhaps, a better word would be "siphoned" which implied the money was diverted into a different account, wittingly, so that it can be used first to settle the government's dues while GST refund recipients were made to wait.

If Harapan hadn't won GE14, those waiting for their GST refunds might still be waiting with no light at the end of the tunnel.

Whichever way you sugarcoat it, the previous government knowingly committed a breach of financial regulations and putting the government technically in financial default since the GST refunds were withheld.

My2cen: According to Noraini, GST revenue that was not transferred into the GST Trust Fund was “not lost” but “used for operational and development purposes”.

I remind her that the loan to National Feedlot Corporation (NFC) for a cattle project was also “not lost” if we go by her interpretation, but used to buy, among other things, condominiums.

If they divert the money from its intended purpose, at best it’s called mismanagement. Doing so knowingly is plainly a crime of “criminal breach of trust”. Transferring money by simply diverting the funds from the intended account is also called “stealing” and “robbing”.

If Noraini cannot recognise this difference, she ought to step down as PAC chairperson.

Carpe Diem: Hello PAC, please explain this: "Following this, the federal government sought a special dividend of RM30 billion from Petronas to pay for the refunds."

If the money not missing, then just transfer it back. Why do you need to get money from Petronas to cover the shortfall?

Kangkung: The money meant for GST refund was used for something else and that didn't count as money missing? Indeed, if no money was missing, why did the government had to get a Petronas bailout?

The previous Umno-led government had channelled the money meant for GST refunds to plug other holes. So isn't this "robbery"? You robbed from one account to pay another.

Blessed Malaysian: PAC should call the previous BN government to be accountable for the delay in the GST refund. The refund delay of more than a year is a reason why Finance Minister Lim Guan Eng said the money is missing.

In my previous company, despite proving the accuracy of the GST returns for refund, it was still delayed without reason for many, many months.

So who bears the cost of the excess cash flows or excess interest incurred to finance operation due to delay in GST refunds?

Anonymous 4289114: In any industry and organisation other than previous Ministry of Finance, transferring money like this between different accounts would be considered a crime.

Lim has absolutely nothing to answer for.

FairMind: The definition of "rob" under Merriam-Webster dictionary states: “To deprive of something due, expected, or desired”.

The PAC chairperson admitted the act of moving the money meant for GST refunds from the GST Trust Account into the Consolidated Revenue Account is illegal. These funds were then used for other purposes. How far is this from the word "robbed"?

Having the PAC chairperson appointed from the opposition is a good idea to keep a check on the current government.

Instead, it is a cover-up made by the PAC chairperson in respect of the previous government which Noraini was a member.

Simple Truth: Noraini, money meant to be returned but put in another account for expenditures can only mean the expenditure account is short of money and therefore, using the refund money to cover the shortfall is wrong.

It did go missing as the money has been spent and is gone. God knows what it was spent on. Just like Umno secretary-general Annuar Musa said, 1MDB money given to Umno was spent. The other money in the party’s account is “halal money”.

Similarly, you are saying that the money used from the expenditure money and meant for GST refunds is gone, and this is not wrong?

Who knows was Najib was trying to do? Did you find out? Your agenda is to protect your “bossku”, right?