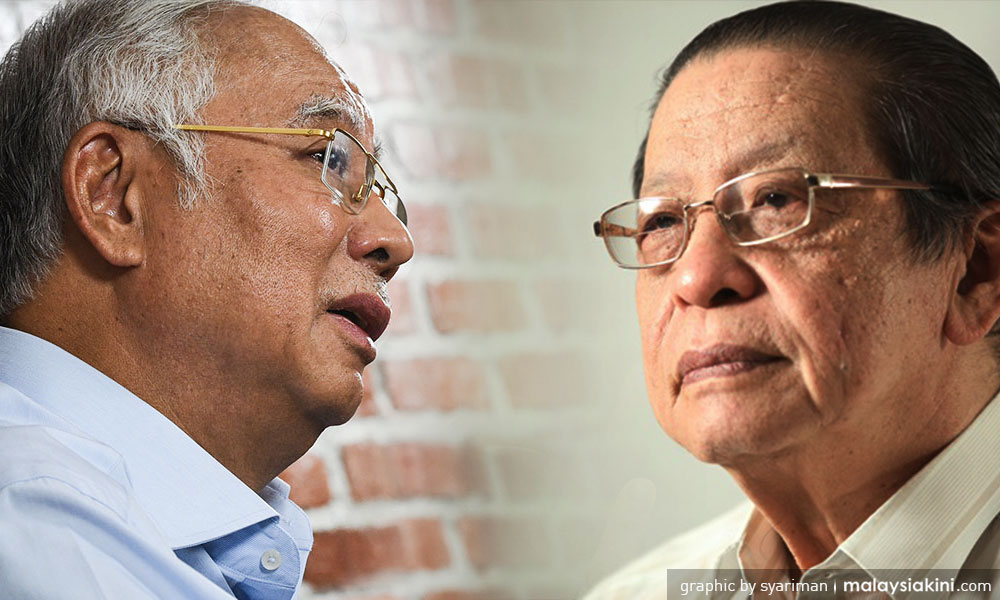 Bersatu is more of Najib's child, not mine – Kit Siang

Lim Kit Siang has credited former premier Najib Abdul Razak with making the political landscape in Malaysia fertile for the birth of Bersatu.

According to the DAP veteran, two events were responsible for the formation of Bersatu, which included Najib being infected with the “virus of hubris” following Umno's landslide victories in the Kuala Kangsar and Sungai Besar by-elections in June 2016.

“If Najib dissolved Parliament immediately after the BN victory (in the Sarawak state election) on May 7, 2016 and the two by-elections, Umno and BN would have been returned to power and God forbid, Najib would still be prime minister.

“Najib's hubris saved Malaysia – for Najib believed he could win big, even regain two-thirds parliamentary majority, with new redelineation of electoral constituencies. So he waited until May 2018,” he added in a statement this morning.

The other factor, Lim said, was the sacking of Umno number two Muhyiddin Yassin, as well as Bersatu chairperson Dr Mahathir Mohamad's son Mukhriz on June 24, 2016.

“If anything, these two events fathered the formation of Bersatu. Can Najib claim paternity for Bersatu?” he added.

Lim also censured Najib for peddling former Bersatu leader Hamidah Osman's (above) claim that it was the DAP veteran who pitched the idea of setting up Bersatu to Mahathir at the Perdana Leadership Foundation on March 4, 2016, “after it became apparent that the people's declaration movement to depose Najib” failed to gain traction.

“It is most reprehensible and deplorable that Najib’s is peddling the Hamidah canard in his campaign to generate distrust and hatred among the races, not realising that he had in the process committed a great slander on the Malay race, believing that the Malays are incapable of thinking and are such simpletons as to fall for his lies and falsehoods,” he added.

Lim also said he agreed with Mahathir that those who believe he masterminded the formation of Bersatu should seek treatment at Hospital Bahagia Ulu Kinta in Perak, famously known as Hospital Tanjung Rambutan.

“The question is whether Najib or Hamidah should go or both should go to Tanjong Rambutan,” he asked.

Calling Hamidah a poor liar, Lim pointed out that March 4, 2016 was the first time that he appeared in a public gathering with Mahathir to sign and launch the people's declaration.

“Nobody in their right senses would talk about the people's declaration not having any traction on the very first day of its signing and launch,” he added.

Furthermore, Lim said he was not aware of any meeting at the Perdana Leadership Foundation in Putrajaya as the declaration was launched at the Universiti Malaya Alumni Club House.

“Hamidah’s tall tale about my being the mastermind in the formation of Bersatu was clearly a wedding gift for Najib for him and (his wife) Rosmah Mansor attending last weekend’s wedding of Hamidah’s daughter in Ipoh.

“But Najib has proved to be the biggest sucker to believe Hamidah.

“Despite all the tens or even hundreds of millions of ringgit which Najib had spent on gathering intelligence when he was prime minister, how could he believe that the proposal for Bersatu was mooted as early as March 2016, when it was several months after the launch of the people’s declaration in March 2016 that Bersatu was formed,” he added.