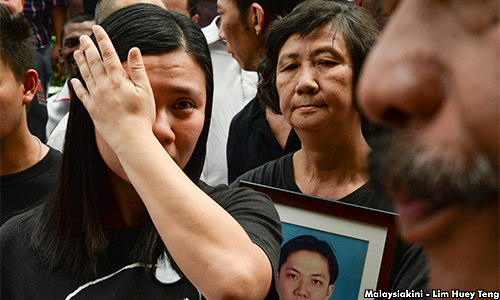 YOURSAY | ‘Will our authorities continue to be a law unto themselves?’

Suhakam found that the Special Branch was involved in the disappearances of pastor Raymond Koh and activist Amri Che Mat.

Mongolian national Altantuya Shaariibuu was blown to pieces by two police officers who never met her and had no motive to kill her. Officials at our Immigration Department also destroyed the record of her entry into Malaysia.

Malaysia Airlines Flight 370 disappeared from the sky, and Flight 17 was shot down over Ukraine.

So who can really protect our safety and rights? Who is supposed to enforce our laws?

GalaxyM: Teoh’s case has exposed the terrible shortcomings of the civil service, which is built on a ‘ketuanan’ (supremacy) mentality, but not integrity, responsibility, credibility and efficiency.

As long as the culprits responsible for the alleged murder of Teoh are not taken to task, the perception of the public towards the civil service will remain negative.

Tidak Harapan: The public has very little confidence in MACC and the police when it comes to investigating the wrongdoings of their own personnel.

While they are enforcers of the law, they are also governed by it, and are required to follow due process.

There have been so many wrongdoings in the past, and they are still ongoing – such as the unlawful beatings of those held in custody.

Unless these bad habits are nipped in the bud now, and those involved brought to justice, these enforcers will continue to be a law unto themselves.

For instance, the Koh case is still unresolved, and the home minister (Muhyiddin Yassin) seems content to continue with his old BN ways. Reform seems impossible.

At the very least, they should have been sacked from their jobs a long time ago.

The Way It Was: We all know that these MACC officers had some role in Teoh meeting his demise. Why do they still have their jobs at the agency? Why doesn’t the new chief commissioner (Latheefa Koya) suspend them immediately?

All we want is justice for the victim. Why are DAP leaders, who are now in power, silent when those who allegedly murdered one of their aides are on the loose? Shame on these DAP leaders who lost their courage to fight for a dead man.

Those who allegedly killed Teoh have been protected by the powers-that-be for 10 years. Enough is enough.

Malaysia My Home: MACC chief commissioner Latheefa, you must reopen the case and let justice be done.

Muruga: Is it correct that the case is being investigated under wrongful confinement and not culpable homicide?

After the court declared that third parties caused injuries to the neck, why the stupidity of ‘wrongful confinement’.

We are in the internet age, and the authorities are making fools of themselves protecting the alleged murderers.

Latheefa, you are in charge of MACC now. You have the files of internal investigations. Please use that and get the attorney-general to charge them.

Indeed, why would the other party agree to pay out so much money when the cause is totally unclear and arguable?

The Pakatan Harapan government, which in reality is made up of mostly the same group of politicians, must make a decision as to how to proceed.

Do they keep doing the same thing and protect the officers in their departments and ministries, or do they decide that things must change for the better and the rule of law must prevail?

There are some good people in charge of important positions now, including the new inspector-general of police Abdul Hamid Bador and Latheefa in the MACC.

The critical decision needs to be made on whether the officers below them are answerable to the crimes committed, or the government wants to continue sweeping the problems under the carpet.

The probe will need to include who gave the order to detain and interrogate Teoh, since it is certainly coming from a politician/politicians who was/were trying to bring down the Selangor government.

As the TBH Trust for Democracy says, they wanted to ensure people do not suffer abuse and custodial deaths at the hands of authorities.

The key people who have shown integrity will now need to decide how to proceed. Do they bring the country to a new level of accountability and transparency, or do they continue to articulate mumbo-jumbo like ‘procedures were followed, no abuse occurred and the suspects died of heart failure or fluid in the lungs, etc?’

The BN government failed notoriously and the Harapan government needs to decide if they want to follow in their footsteps, or chart a new future.

Mission Accomplished: Ten years have passed, and the alleged killers are still roaming freely in our midst. This is unacceptable in any civilised country.

When are authorities going to act and wipe off the shame hanging over the nation? Incompetence is too deceptive a word to shield criminals.