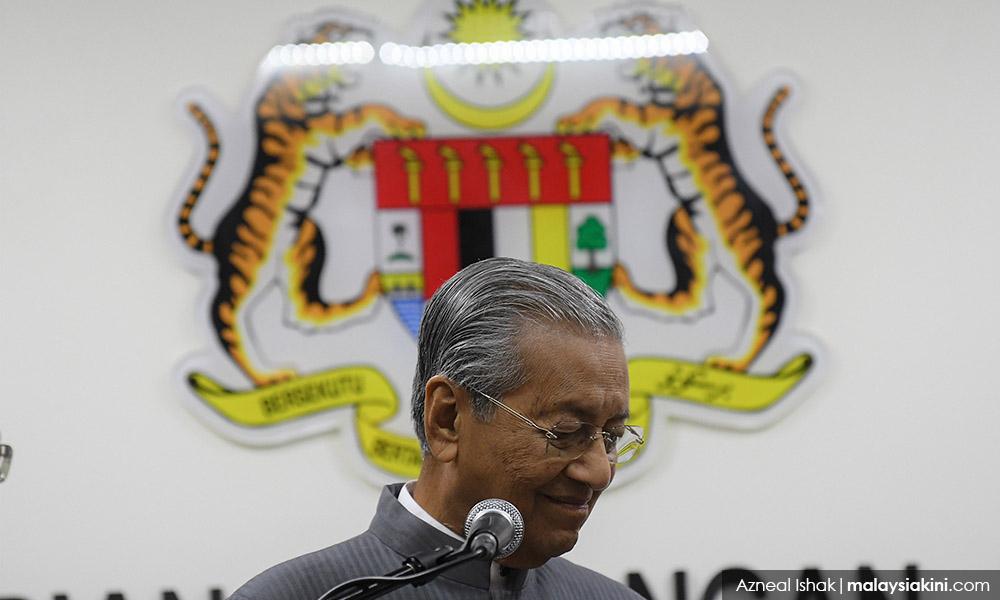 Yoursay: Dr M not wanted past 2 years? Polls have been wrong before

YOURSAY | 'The issue of the next PM has become Mahathir's personal Game of Thrones.'

IDE survey: Most don't want Mahathir to stay as PM past 2 years

SL Yeap: So the survey by Selangor government think tank Institut Darul Ehsan (IDE) says most Malaysians don’t want Dr Mahathir Mohamad to stay on as prime minister past two years, and that 45 percent want to see Anwar Ibrahim as his successor?

I sincerely doubt so many want Anwar in charge. Practically everyone I know says he comes across as untrustworthy.

Anwar couldn’t even run the PKR election properly, and now he’s jeopardising the entire Pakatan Harapan coalition with more of his gutter politics, as seen in the scandal engulfing his deputy, Mohamed Azmin Ali.

But then, we all know how reliable polls are, don't we? Most of the so-called experts previously predicted that BN would retain power in the 14th general election, Brexit would not happen, and that Donald Trump would not win the presidency of the United States.

A fortune teller with a crystal ball would be more accurate than these ‘expert’ pollsters.

Prudent: Mahathir is a lightning rod for controversy due to his Machiavellian ways, which Malaysians don’t need.

The ‘hand-kissing’ Anwar may not be any better for Malaysia, based on his track record. But at least Malaysia would get a breather.

First, however, the power vested in the prime minister has to be reduced. Otherwise, too much power will be in the hands of whoever is in the hot seat.

Mission Accomplished: @Prudent, whether Mahathir stays or leaves is beside the point. What is more important is to find a suitable and capable candidate to take over the reins.

Our blessed nation was so badly damaged by the former Umno kleptocracy that it needs a superman to save it.

Most Malaysians accepted Mahathir as an interim prime minister with an unclear timeline for him to hold his post. But if he leaves now, Anwar – who cannot even manage his own party – will take over.

Anonymous_1399778124: I thought the question of who would become prime minister was already decided, way before GE14.

Mahathir was always supposed to be a stop-gap measure. Few really loved or trusted him. He was a compromise candidate, in view of his support in the election.

JW: This IDE survey only makes things more divisive. Still, the one who all along created this divisiveness is none other than Mahathir, who has proven again to be purely egoistic – not being bothered about grooming good leaders to care for the country, instead of caring for his own legacy.

If he really cared for the good of the nation, the prime ministerial succession would not be his personal ‘Game of Thrones’.

Procul Harum: Better for Mahathir to relinquish the post and let Anwar run the country. Otherwise, we will be listening agonisingly to the same old rhetoric about race and religion, day in day out.

Anonymous_1543918786: There must be an agenda behind this survey. What is the purpose of this when Mahathir had already promised to hand over the reins to Anwar before GE14?

Anonymous_1543386425: None of the other candidates named here – Anwar, Azmin, Muhyiddin Yassin and Mohamad Sabu – are suitable after Mahathir.

Surprised that Anwar could get the highest vote considering the huge baggage he carries. Mahathir should continue until a more credible candidate puts himself in contention.

The Analyser: I was astounded that only 20 percent want Mahathir to step down immediately.

Mahathir: Crime is the alliance trying to bring down Azmin

Kim Quek: Mahathir’s topsy-turvy understanding of the law is shocking.

He doesn't see anything criminal in the alleged tryst between Azmin and Haziq Abdullah Abdul Aziz, but he considers the plot against Azmin a crime.

The reverse is true. There is no law in the country criminalising political conspiracy, however, but there is clear law criminalising “carnal intercourse against the order of nature”.

I hope Mahathir’s misreading of the law has not influenced the investigations of the police, which seem to only be centred on catching the ‘conspirators’.

Fighting for Justice: Mahathir is right in saying that the real crime in the sex video scandal is that there is an alliance trying to bring Azmin down.

This masterpiece drama is no rocket science. There definitely is a gang orchestrating all of this behind the scenes.

This same plot was a blockbuster the last time around, 20 years ago. It worked then, and it will work now.

Anonymous_770241447347646: No doubt it is gutter politics using such tactics to bring politicians down, but they should know by now to avoid being involved in any criminal activity or in compromising positions.

Mahathir should stop taking sides, as his previous reaction to Anwar was so much different. Why react in this manner now?

Anonymous_1538808416: I seriously doubt Mahathir will hand over the reins to Anwar. The old man is his old self again.

I am puzzled, however, by PKR and DAP being so naïve as to believe that he would honour his word, without anything in black and white.

DAP and PKR, both parties filled to the brim with lawyers, must know that the most common mistake in any shareholder dispute is not having an agreement. The same principle applies here.

Perhaps they trusted the old man too much. Now he can drag his feet as long as he wants. He just has to keep saying his job is not done yet.

Rembrandt: Don’t blame Mahathir. Blame Anwar and Azmin for not being smart enough to realise they are being played to bring PKR down.

If they stood united and supported each other through the crisis, then nobody could shake them or their party.

Now both will lose. All because they are greedy for power.

Bo Kia: BN just has to sit tight. Their return to power is possible, without even waiting for the next election. Harapan is in self-destruct mode.