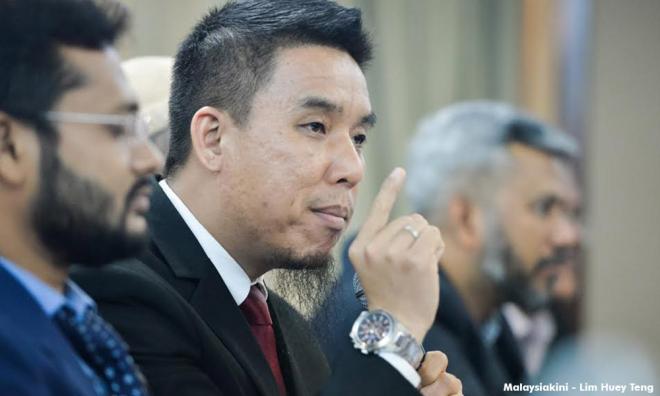 Yoursay: So Zakir Naik has franchised his 'talks' to his students

YOURSAY | 'Not only did we allow the preacher to stay, we are now allowing him to start a franchise.'

Activist: Would MOE allow a priest or pastor to give talks in schools?

David Dass: Neither I nor my children or grandchildren should be addressed as "belum Muslim (not yet Muslims).”

I can understand the aspirations of believers of any faith wanting the 'truth' as they believe it and experience it to be known and accepted by others.

That is exactly how I feel about my religion too. But I know that those of other religions feel the exact same way about their beliefs, and so I restrain myself.

Instead, I let my behaviour be an example for others. After all, nothing can be a better teacher of one's beliefs then the example we set by our behaviour.

But to make religion a matter of politics and to convert by covert means and by deception is wrong. It is like the old days when converts were obtained by conquest and by bribes.

There are tons of material on every faith in libraries, bookshops and on the Internet for seekers. Leave the faith of little children to their parents. It is their business. It is not the business of zealots of any other faith.

Norman Fernandez: The fact is that preacher Firdaus Wong's “motivational talk” was a covert agenda by the school using the Parent-Teachers Association as a smokescreen to allegedly proselytise to non-Muslim school children.

Look at the target of the students chosen. Schoolchildren who were already of pubescent age, and they can make their own decision without the consent of their parents.

Look at the “motivational speaker” chosen. Firdaus, a speaker well known for his Wahhabi slant and who is known to always address non-Muslims as “belum Islam."

In any event, despite the school’s denial, the preacher has admitted that his intention was to preach. So clearly, the “motivational talk” was just a ruse. The real agenda was to “memurtadkan dan memesongkan akidah bukan Islam (to weaken the faith of non-Muslims)."

Do remember how some teachers from the peninsula teaching in East Malaysia who had converted children without the consent of the parents.

Non-Muslim parents who are unfortunate or have no choice but to send their children to national schools should start realising the dangers and risk.

Vgeorgemy: The deep state in the Education Ministry and Prime Minister's Department (Islamic Affairs) are giving a deliberate message to the moderate and progressive communities that the right-wing agenda will be imposed to eliminate the democratic aspirations of the rakyat.

Both ministers were likely trained and brainwashed during their school days to implement such ideas.

The fact is that this advice has fallen on deaf ears all these years. Even the new education minister plays deaf, dumb and blind to what is happening in our schools today.

We are not sending our children to government schools for them to be exposed to the likes of Firdaus. There is nothing he can offer that is remotely educational.

Vent: If by his own admission Firdaus is a Muslim preacher, then why is he in a school giving a speech outside the Islamic Studies class? The Education Ministry doesn't have to answer the question. We get it.

Idiocracy: What can a student of Zakir offer to our school children that is so motivational?

Not only we allowed Zakir to stay, we are now allowing him to start a franchise of his talks.

Gaji Buta: So can we have a priest giving motivational talks in schools as long as he does not touch on any racial or religious matters? Imagine the other person doing the same and see how you feel.

PB: What has happened to the schools I went to in the 1970s? There is a rot in the country that needs to be excised.

We can complain about the stumbles of the Pakatan Harapan government, but at least it is trying. We cannot go back to the BN government that first took us down this disastrous route.

FairMalaysian: It is good that guidelines have been issued on who can be invited to deliver such talks. Indeed, why call someone who may court controversy?

Recalling my school days, those were wonderful times in Malaysia where we had great friends among all races. Where has that gone?

Anonymous_3f4b: This is the major reason why non-Malay and non-Muslim parents are shunning national schools like the plague – subtle and not-so-subtle religious brainwashing.

The national schools are more like religious schools now, paying more emphasis on religious education than languages, sciences, mathematics, the arts and social sciences. That is why Malaysians score so low in science and maths.

The quality of education in national schools have gone to the dogs. There is no teaching of commerce, data analysis, algorithms, robotics, automation, coding or artificial intelligence in schools besides secular history and geography.

Subjects like English literature, agriculture science and commerce were shelved and now making a comeback after two lost generations in favour of religion. The value of these subjects is being felt now.

Worse we have the idiotic education minister and his deputy talking about shoes, among other things.