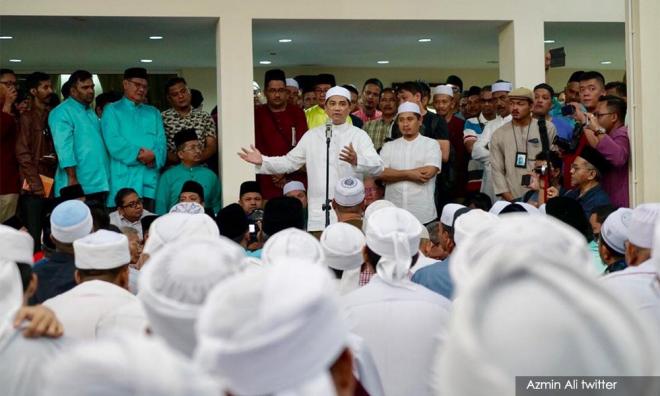 I know who the sex video mastermind is - Azmin

Economic Affairs Minister Mohamed Azmin Ali said that he knows the identity of the mastermind behind the circulation of the sex video that implicated him.

However, Azmin declined to name the person, as the matter is still under police investigation.

"I cannot reveal the name because it is still under investigation. Let’s wait for the probe to be completed.

"But since day one (when the video was distributed), I have suspected internal (party) elements,” he told reporters after attending a special prayer session to reject gutter politics against him at the residence of Selangor Menteri Besar Amirudin Shari in Shah Alam last night.

Azmin, the PKR deputy president, said he would continue to cooperate with party president Anwar Ibrahim to champion the party’s agenda.

He said there was no reason for him to deny the working relationship despite their recent war of words over the video controversy.

"Anwar and I will continue to cooperate because he is the president and I am his deputy; do not provoke us as we have been together for many decades (in the party struggle),” he said.

Inspector-General of Police Abdul Hamid Bador has said investigations showed that the video was likely authentic, but the facial recognition analysis could not link it to the person implicated in the scandal.

Azmin urged the party leadership to avoid squabbling and to reject gutter politics.

"The people gave the mandate to Pakatan Harapan not to quarrel… we have to reject dirty politics because the people are fed up with such matters and I urge the media to be together with us in disseminating the correct information,” he added.