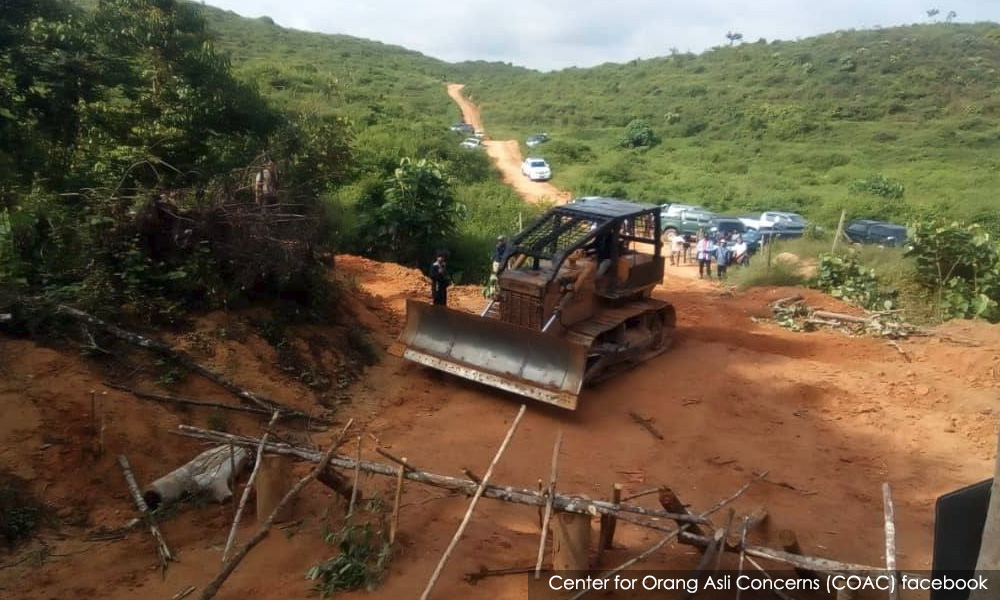 Hang Jebat: With the fresh arrests of Temiar villagers from Kampung Sungai Papan, Gerik, there is a need for the loggers to be identified, so a clearer picture will emerge.

The police seem to have no respect at all for Minister in the Prime Minister's Department P Waythamoorthy, who just a few days ago asked the police to release three other villagers arrested after clashing with loggers.

Ignoring a federal minister means a higher authority is involved. Waythamoorthy must know who they are. Time for them to be identified.

Mohd Isnin: Who is the mastermind directing the police to arrest the Temiar villagers? Arrest this mastermind without fear or favour and the problem will be solved.

I pity the Orang Asli. How would you like it if your kampung was torn down? Heartless creatures.

Don’t Just Talk: What is happening now is that might is right, and to hell with Orang Asli rights.

Can the Forestry Department stop these illegal loggings and return the native land rights to the Orang Asli?

Perhaps Waythamoorthy should lodge a report with MACC to investigate these illegal logging activities.

No Fear Nor Favour: MACC, please step in to ascertain whether there are any corrupt practices among the parties involved. This land belongs to the Orang Asli, the true bumiputera.

The Analyser: It’s time the Pakatan Harapan government strengthened the concept of native customary land rights so that the concept is truly meaningful and legally binding.

The Australian government set a precedent in their native title legislation, which can be copied in Malaysia to protect the rights of all indigenous peoples in this country.

But of course, they won’t because their thinking is dominated by selfishness and greed. All they ever think of is themselves.

Plato: Perak has long been known for its illegal logging activities. All logging permits must be sanctioned by the state government.

Did it sanction this? Did they get the Forestry Department to consult with the Orang Asli prior to issuing the permit and adhere to the Malaysian Timber Certification Scheme (MTCS)?

Under the current circumstances, why can't the state exco member in charge halt the logging, revisit and investigate this case? It appears the Forestry Department director has more power than the exco in this matter.

If this continues, it will be a one-term Harapan government in Perak.

Rembrandt: I notice that Perak Menteri Besar Ahmad Faizal Azumu is keeping very quiet, although this standoff is happening right under his nose.

He has the power to help the Orang Asli, but he isn’t using it. I wonder why?

S Kumar: Here in Malaysia one needs to take the law in their own hands as the Orang Asli are the minority and they are nobody.

I mean the people in the government do not give a damn about them. Take Teoh Beng Hock as an example. If the family did not continue their struggle for justice, the case would have been closed long ago.

If someone intrudes onto your property and the law is on their side, then the Orang Asli have to act on their own.

Perak Boleh: @S Kumar, nobody is above the law. If you break the law or take the law in your own hands, you deserve to be arrested and thrown in jail.

Waythamoorthy, you as a minister and lawmaker should not encourage people to break the law so that you can be hailed as a hero.

Broch: As always, let’s return to the Harapan manifesto. It says:

“Customary land is an important matter for indigenous peoples. The Harapan government will work to implement proposals from the National Inquiry Report on Indigenous Land Rights prepared by Suhakam in 2013. This report has been ignored by Umno and BN and will be brought for parliamentary debate in the first year of the Harapan administration.

“…In order to enable the indigenous customary land to be properly recognised, the Harapan government will allocate funds to carry out a complete study that can accurately identify the boundaries of customary land.

“More resources will be allocated to upgrade the infrastructure of the Orang Asli villages, including paved roads, 24-hour electricity grid, treated water supply and stable communication networks so that the Orang Asli communities are no longer marginalised.

“The number of schools in Orang Asli villages will be increased and equipped with good facilities to ensure their children receive quality education. This will include a curriculum that will factor the Sociology of the Origin of Indigenous Peoples. Allocation will also be made to preserve the indigenous peoples' culture and heritage.”

Amazing. Has any of this been done?

Sleepy: I confess that I do not know much about this case or the reasons for the arrest.

I do know there should be no free passes to commit crimes, and that all ministers are merely human – therefore, their opinions have no legal standing, unless we want to go back to the age of feudalism and dictatorship.

On the Other Hand: @Sleepy, you are right. You do not know much about this case.

FairMalaysian: "Waythamoorthy, who is in charge of Orang Asli Affairs, said the Federal Court has recognised that Orang Asli customary land rights supersede the rights of the state governments."

Something good to hear. It looks like issuing logging contracts that encroach on NCR land is illegal. Hopefully, MACC will act on this as greed has no bounds.

The protracted standoff in Kelantan, and now in Perak, should not have happened had the authorities observed the law and the court decision.

Isn’t it funny that the actual lawbreakers are making those acting within the boundary of the law look like criminals?

Headhunter: Precisely. Why are the police always on the side of loggers when the natives are the aggrieved party?

Same as in Sarawak, where some natives have even been killed in their confrontation with powerful and well-connected loggers, without anyone being charged.

I salute Warthamoorthy for shining the spotlight on the underdogs. May the force be with you.

Does he not have anything to say about the people whose welfare is his primary concern, based on the augments he made when was he standing for the by-election?

Is he in deep slumber and enjoying his perks without a care in the world for the most vulnerable segment of the population?

Advertisement
01
Anwar: Nothing personal against Dr M, we can agree on issues
12 Jul 2020
02
Adib's family upset with IGP, against revising decision on cause of death
12 Jul 2020
03
Despite rallying for Muhyiddin, PN registration still a sticking point for BN
12 Jul 2020
04
Govt and opposition blocs gear up ahead of Parliament showdown
12 Jul 2020