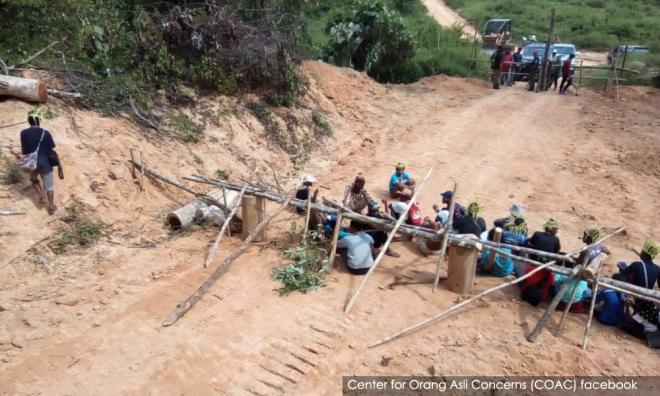 Arrested Temiar villagers expected to be brought to court today

The three Temiar villagers arrested in Gerik yesterday are expected to be taken to the Gerik Magistrate Court this morning.

According to rights group The Centre for Orang Asli Concerns (COAC), the men from Kampung Sungai Papan could be charged for causing mischief by rendering public roads, bridge or river impassable or unsafe.

The offence carries a punishment of up to five years' jail, a fine, or both upon conviction.

“Reports are varied as to what they will be charged for. Section 431 of the Penal Code (committing mischief by obstructing a public road) or Section 341 (wrongful restraint).

"But two of them will also be charged for not having their ICs with them,” COAC claimed in a Facebook post today.

The NGO added that a group of up to 57 Temiar villagers have been keeping vigil at the Gerik police station since the arrests.

Loggers in Kampung Sungai Papan are alleged to have encroached on native customary land, which resulted in the Temiar community erecting a blockade to keep the loggers out.

Even so, the Perak government maintained its right to grant logging permits for the area.

The resulting conflict saw three villagers being arrested last Saturday, with police and loggers bringing down the blockade.

The trio was later released following a plea by Minister in the Prime Minister's Department P Waythamoorthy.

Despite the minister’s appeal to state authorities to cease further arrests and not side with the loggers until the legal boundaries of NCR land are determined, police yesterday arrested three more villagers.

Waythamoorthy, who oversees Orang Asli Affairs, said the Federal Court had repeatedly recognised that Orang Asli customary land rights supersede the rights of the state governments under the Federal Constitution.

"Until the legal boundary of Orang Asli’s land rights are determined, I am of the view it is illegal for state authorities to unilaterally grant permits for developers to encroach and exploit the rights of these defenceless people without prior informed consent," he had said.

Forestry Dept: We did not bring down blockade

Meanwhile, in an earlier Facebook post, COAC denied claims by the Perak Forestry Department that the blockade was 25km away from Kampung Sungai Papan.

COAC posted: “They are wrong! The nearest settlement is Kampung Ong Jangking, which is 800m away in a straight line. Kampung Sungai Papan is 2.2km away. Not 25km.”

In a statement yesterday, the department claimed the blockade set up by the Orang Asli to curb logging in Air Chepam Forest Reserve was not only 25km away from their village but also erected on Felda land.

“Checks have shown that the three arrested men (arrested on Saturday) were not from Kampung Sungai Papan, but from Kampung Cunex,” the statement read.

Following a police report lodged by the logging company on July 17, discussions were allegedly held two days later between the logging licensee, the Sungai Papan indigenous community, Perak Forestry Department and the police.

Even so, the department claimed another police report was lodged by the logging company the same day to ensure the safety of its staff and equipment, and sought police help to take down the blockade.

“The department was not involved in destroying the blockade on July 20.”

It confirmed the logging company was licensed to cultivate 80ha of land within Air Chepam reserves.

Up to June 2019, the department has issued 55 such licenses, well within its annual cut ration (CTT) of 7,744ha for the year, and in line with National Land Council (MTN) stipulations, “which simultaneously ensures continuous wood supply for the wood-based industries in Perak and in stable quantities.”

It added that the department was constantly monitoring logging activities to ensure the licensee adheres to all necessary procedures, conditions and actions.

These include the type and numbers of trees felled, as well as keeping waterways free from pollution.