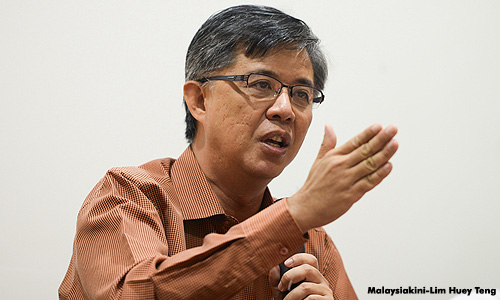 PKR vice-president Tian Chua has ticked off party members for what he described as an overzealous display of support for certain leaders amid disagreements between those leaders.

"There are some elements within the party have overzealously displayed support for this leader and that leader.

"Consciously or unconsciously, some supporters strive to outdo one another and intensified tension within the party.

"No matter what is their motive, their action is sowing seeds of suspicion and conflict between different leaders. Unfortunately, it has seriously undermined the party unity," he said in a statement today.

In recent weeks, PKR division chiefs have been professing their support for either PKR president Anwar Ibrahim or his deputy Azmin Ali amid a rift between the two leaders.

Tian Chua reminded party members that enemies of PKR, Pakatan Harapan and the reform agenda are bidding their time to exploit a situation and a divided PKR will invite external intervention that could lead to "self-destruction".

"Lately, it seems that there is a vicious agenda with the hideous objective of causing public confusion on PKR.

"Certain quarter of the mass media is also intentionally creating a perception that PKR is divided or even at the verge of collapse.

"PKR is one of the pillars of Harapan. Turbulence in the party will inevitably affect the stability and performance of the Harapan government. Sensibility, rationality and mutual respect must prevail against emotional sectarian mobilisation," he said.

Chua said disagreements within the PKR leadership and grassroots was inevitable but nobody should willfully cast doubt on the issue of loyalty and provoke protected conflicts between key national leaders.

He said such behaviour does not serve the interest of the party and unwittingly undermines Anwar's credibility as the PKR president.

"I hereby wish to reiterate my stand that as a member of PKR I give full support to Anwar Ibrahim to exercise his mandate as party president and eventually assume the premiership according to Harapan consensus.

"Meanwhile it is my responsibility to vehemently preserve and defend the unity of president, deputy president, and the national leadership in entirety. I would not allow anybody with ulterior motive to destroy this unity.

"Those who try to harm the relationship of president with deputy president and various vice presidents are advancing the agenda of Harapan's enemies," he said.

Chua said those who seek to destabilise the cooperation and harmony of the party leadership will be detected and exposed by party members at the grassroots and public at large.

"The rakyat expect us to perform our duty and deliver economic progress, social welfare and good governance as the government of the day.

"PKR is the largest component party in Harapan and has a heavy burden on our shoulders. We should not let our internal contradictions continue to deteriorate.

"We need a lot of concerted and level-headed efforts to resolve issues in order to be back on track in serving the people," he added.

Chua said his sincere call was for PKR members to put the long-concluded party election behind them and set aside factional rivalry and sectarian manoeuvres.

"We shall accept the decision by the membership, give undivided support to the president and deputy president.

"Now it is the time for healing and rebuild trust among leaders. We have to race against time and refocus our work to the reforms and governance.

"This is the only way to retain people’s confidence in Harapan and PKR," he said.

Subsequently, former Santubong PKR Youth chief Haziq Abdullah Abdul Aziz (above) admitted that he is one of two men having sex in a video. He claimed his partner was Azmin.

Police have arrested several individuals, including Haziq and an aide to Anwar, as part of an investigation over the circulation of obscene content.

PKR members taking sides over the matter has widened the rift between Anwar and Azmin.