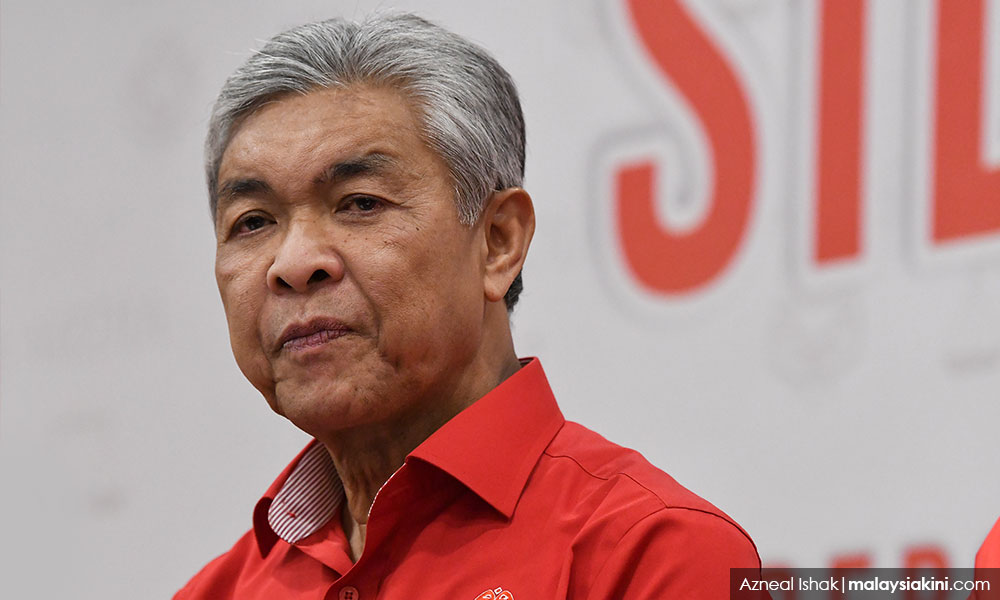 Umno's opponents will have to cross the dead bodies of its party members if they want to try and dissolve the party, said its president Ahmad Zahid Hamidi.

"In the name of Malay and Muslim unity, do not ask Umno members to jump to Bersatu. Do not try to dissolve or outlaw Umno.

"If Umno is to be dissolved, cross the dead bodies of Umno members first. Cross all of our dead bodies first," he said when officiating the Ipoh Barat Umno division meeting in Perak today.

In his speech, Zahid also set out the terms for cooperation with other parties in the name of Malay unity.

"Firstly, they (those who want to negotiate) cannot be in cahoots with the cursed (Laknatullah) DAP.

Zahid had met Mahathir last year, who reportedly told him to dissolve Umno as it no longer represented the Umno that was. Zahid has vehemently refused to do so.

However, Umno is also facing financial difficulties as its bank accounts have been frozen for receiving funds from former Umno president Najib Abdul Razak, who is accused of stealing billions from 1MDB. He has denied wrongdoing.

Zahid. in his speech, went on a tirade against the DAP and blamed it on Bersatu chairperson Dr Mahathir Mohamad, who was previously the Umno president.

"Who taught us to hate the DAP?" he asked as the crowd replied: "Mahathir".

"But the same man who hated the DAP is now kissing the DAP for power," he said.

politics
umno
pas
ahmad zahid hamidi
Related Reports
Zahid: Umno should learn from PAS members’ loyalty
a year ago
Zahid smacks Anwar over DAP again, says will reject cooperation
a year ago
Zahid: 'Indebted' Anwar needs DAP for his goal, sees them as always right
a year ago
Umno and PAS to ink cooperation charter on Sept 14
a year ago