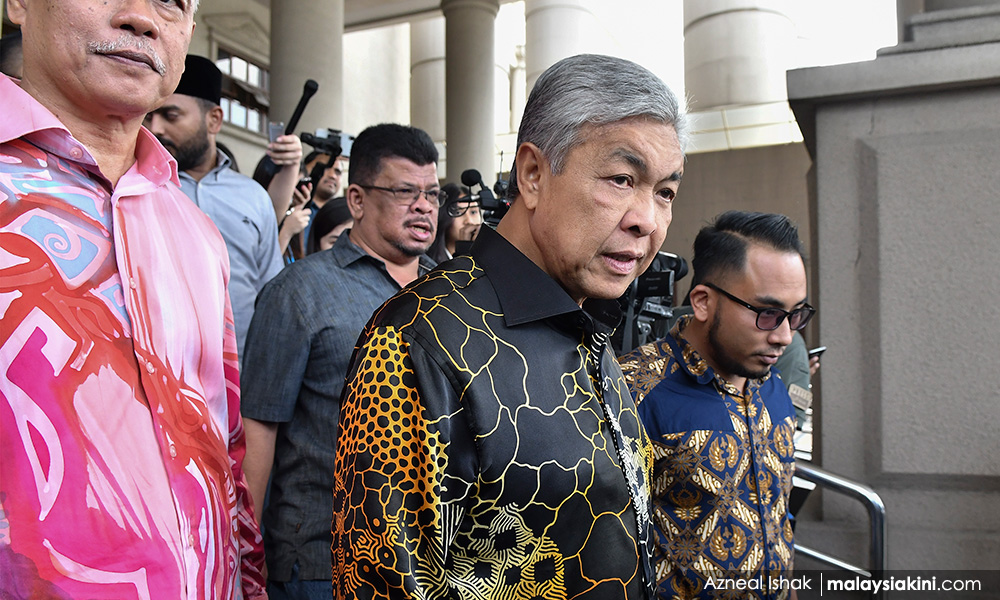 Zahid was present in court this morning for mention of 33 charges linked to receiving RM42.7 million in bribes from Ultra Kirana Sdn Bhd.

At the start of proceedings, deputy public prosecutor Gan Peng Kun said that an application was filed last Friday for the 33 charges to be transferred to the Kuala Lumpur Sessions Court, where Zahid is facing another seven charges of receiving bribes totalling S$4.24 million (RM12.74 million), also linked to Ultra Kirana.

"A hard copy of the notice (on the motion to transfer) was handed over (to the defence) this morning," said Gan.

Zahid's counsel Ahmad Zaidi Zainal, however, raised an objection, as the defence had filed a similar notice on July 15 to transfer the seven charges from Kuala Lumpur to Shah Alam.

"Our notice will be heard on Wednesday (July 31). If our application (to transfer from KL to Shah Alam) is granted, then this (notice by the prosecution) will become academic," the lawyer said.

On June 26, Zahid claimed trial at Kuala Lumpur Sessions Court to seven charges under Section 16(a)(B) of the MACC Act 2009 and Section 165 of the Penal Code.

If found guilty under Section 24(1) of the MACC Act 2009, he could be jailed up to 20 years, and fined not less than five times the value of the gratification involved in the offence, or RM10,000, whichever is higher.

The next day, Zahid appeared before Rozilah to face charges for 33 more offences allegedly committed during his tenure as deputy prime minister and home minister between October 2014 and July 2017.

In total, the Bagan Datuk MP currently faces a total of 87 charges – including for alleged criminal breach of trust involving his family-run foundation Yayasan Akal Budi, money laundering, as well as accepting bribes for various projects during his tenure in the Home Ministry.

His trial for CBT and corruption will start on Nov 18 at the Kuala Lumpur High Court.