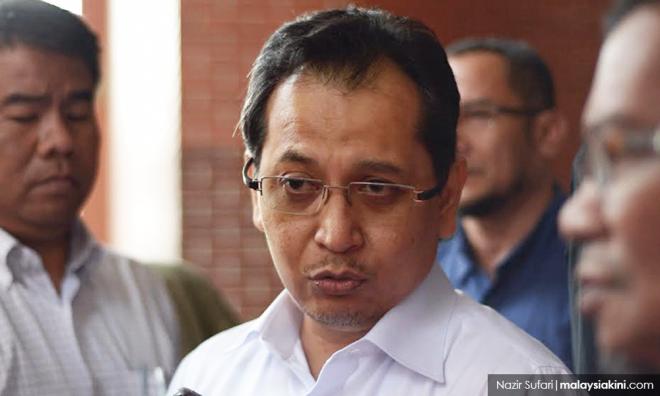 Ezam: Meaningless for desperate leader to show support for PM

Former senator Ezam Mohd Noor may have made peace with PKR deputy president Mohamed Azmin Ali in 2017 – even once proposing him as a potential candidate for prime minister – but the reconciliation appears to be short-lived.

In a veiled salvo aimed at Azmin today, Ezam said while there was no doubt about the support for Dr Mahathir Mohamad, it must be based on honesty rather than the "desperation" of someone facing serious allegations.

Though not naming Azmin, Ezam appeared to be referring to the minister's statement yesterday expressing support for Mahathir to stay on as prime minister for a full term.

This is despite a Pakatan Harapan consensus for Mahathir to hand over power to PKR president Anwar Ibrahim – with whom Azmin is engaged in a feud – before the end of his term, although no concrete time frame has been given.

"For us, the basis of the government led by the current prime minister is the commitment to change in terms of combating corruption and good governance.

"Support without basis will not bring about anything positive to the progress of this nation for change...

“It is meaningless, and could even be negative, if it is done by a desperate leader plagued by serious allegations that have yet to be resolved, for personal political purposes," Ezam said in a statement.

Last month, a sex video split into several parts was released to politicians and journalists by anonymous persons.

Subsequently, former Santubong PKR Youth chief Haziq Abdullah Abdul Aziz admitted that he was one of two men shown in the video, and claimed Azmin was the other.

Police arrested several individuals, including Haziq and an aide to Anwar, as part of an investigation over the circulation of obscene content.

PKR members taking sides over the matter have widened the rift between Anwar and Azmin.

Ezam quit PKR in 2007 after a falling out with Anwar and Azmin, which included a public spat with the latter.

When his departure from PKR was made public, Ezam had called Anwar "weak," and accused Azmin of controlling the then-de facto leader of PKR.

Ezam rejoined Umno in 2008, but left the party again last year over the 1MDB matter.

He is now in the midst of setting up a new anti-corruption party after his bid to rebrand an existing party failed.