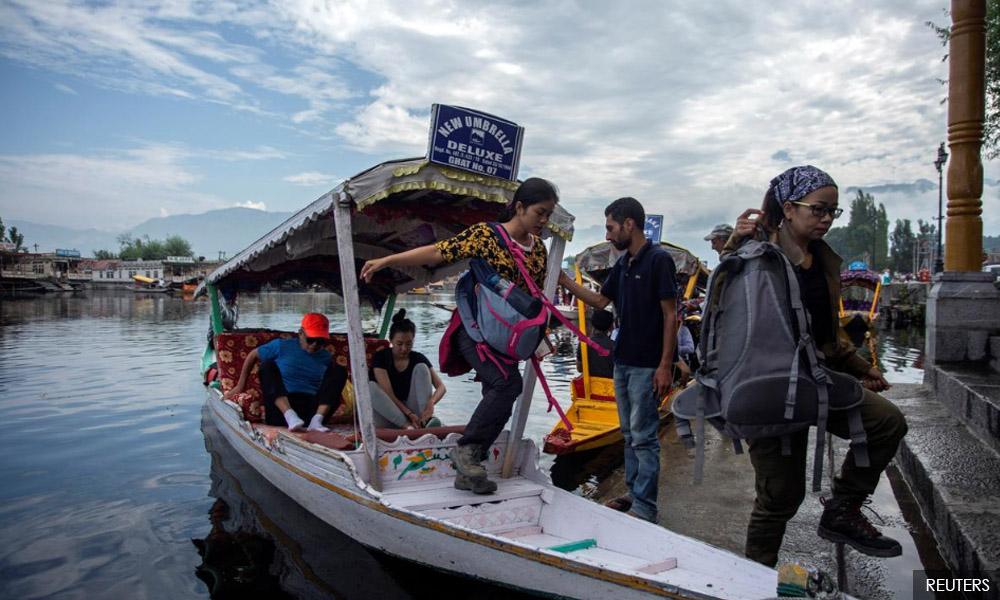 Thousands of Indian tourists, pilgrims and workers began leaving the disputed region of Kashmir after a local government alert over possible militant attacks, and India said it killed at least five militants who were trying to attack its forces.

Indian security officials said on Friday they had found evidence of attacks planned by what they said were Pakistani military-backed militants on a major Hindu pilgrimage in Muslim-majority Kashmir.

A local government order called off the pilgrimage, asking the pilgrims and tourists to return home.

Srinagar-based Indian defence spokesperson Colonel Rajesh Kalia said on Saturday that there had been a number of attempts by Pakistan-based militants to disturb peace in the Kashmir region and target the pilgrims.

Around five to seven militants were killed when they tried to attack Indian troops near an area known as the Keran sector, Kalia said, adding that arms and ammunition were recovered in the operation.

"Security forces will continue to respond to all nefarious activities," Kalia said.

The official did not give a specific number, but he said most of the 20,000 Hindu pilgrims and Indian tourists and the more than 200,000 labourers were leaving the region.

Kashmir, claimed by both India and mostly Muslim Pakistan, has long been a flashpoint between the two countries. Tensions flared after a vehicle laden with explosives rammed into an Indian police convoy on Feb 14, killing 40 paramilitary policemen, and leading to aerial clashes between the two nations.

India accuses Pakistan of funding armed militants, as well as separatist groups, in India's portion of the region. Islamabad denies the Indian accusation, saying it provides only diplomatic and moral support to the separatist movement.

In a statement late on Saturday, the Pakistani government said it was concerned about the situation in Indian-occupied Kashmir, adding it rejects India's assertions of "intelligence inputs" about some imminent attack.

The Pakistani foreign minister has voiced concern in letters to the United Nations secretary-general and the presidents of the Security Council and the General Assembly, it said.

The Indian advisory was issued after the local government in Kashmir said a mine with Pakistani ordinance markings was among caches of ammunition retrieved following intelligence reports of likely attacks on routes used by devout Hindus who trek to the region's holy Amarnath cave every year.

In a mood of anxiety, people sought to stock up on essentials and there were long queues outside petrol pumps, ATMs and medical shops in Srinagar, the summer capital of Jammu & Kashmir state.

More than 6,000 passengers left Srinagar by air on Saturday, the Airports Authority of India said in a statement.

Still, around 60 international tourists arrived in Kashmir on Saturday, one of the local government officials said.

The Indian advisory had cautioned tourists in general, but did not give any specific advice to foreign nationals.

Britain and Germany issued advisories on Saturday to their citizens discouraging them from travelling to Jammu and Kashmir.

On Saturday, Pakistan also accused India of using illegal cluster bombs in the Kashmir region during shelling along the contested border. India denied those accusations.

The Indian advisory was a disappointment for pilgrims and tourists.

Kashmir touts itself as a "Paradise on Earth". Dal Lake - a favourite destination centuries ago for Mughal emperors escaping the summer heat of India's plains - and its houseboats, mountains and glaciers are major attractions.

Prabakar Iyer, 45, had travelled to Srinagar from the southern Indian city of Bengaluru on Thursday with his family for a 10-day holiday, but they left on Friday night.

"I was staying in a houseboat on Dal Lake when the advisory was issued. I fail to understand why we are being asked to leave. Everything is normal here," he said.

Labourer Manjit Singh, a carpenter from the northern state of Uttar Pradesh who has been working in Kashmir for the last nine years, also left.

"I am not afraid, but the government advisory has created panic and my family wants me back ... I will return if the situation improves," he said.