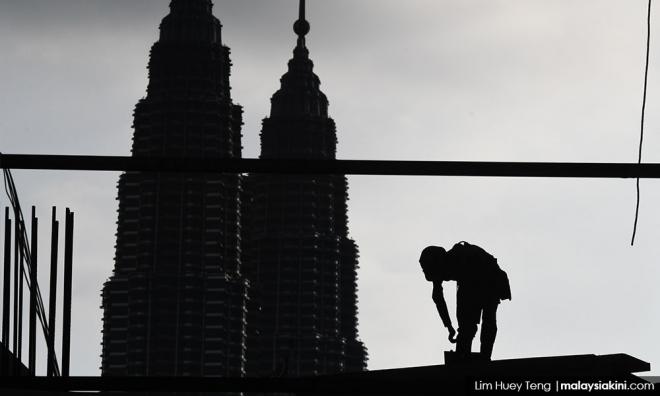 COMMENT | Undocumented migrant workers make up more than two-thirds of the migrant workforce in Malaysia, and their numbers seem to be growing steadily.

The government has always acknowledged a legal migrant workforce of about two million; the number of undocumented workers, meanwhile, is now thought to be a staggering five million!

Paradoxically, though they are considered illegal and regularly hunted by immigration officials, they are the mainstay of our small and medium enterprises, farms and construction industry.

But this ‘invisible’ workforce whose huge contribution to the economy is not officially acknowledged, and whose numbers don’t feature in our population statistics, didn’t all enter the country illegally.

Our Home Ministry itself will vouch for the fact that there is no way foreigners without papers can enter the country in such massive numbers.

Most migrant workers become undocumented for reasons linked to the lucrative labour migration trade. Many are victims of trafficking and smuggling syndicates which involve a complex chain of actors working together, including corrupted officials and enforcers from both country of origin and destination.

The human resource minister has repeatedly said that the number of migrant workers entering Malaysia is not solely determined by his ministry and that the Home Affairs Ministry also has a say. This duplication of roles leads to over-recruitment for profiteering and exploitation.

Human trafficking, over-hiring and cheating for fast money result in workers becoming undocumented soon after they arrive. The absence of the right to redress, the illegal holding of passports, and other realities like the nature of the construction industry necessitating a regular change of employer – all these further make the migrant worker vulnerable to becoming undocumented at any time.

The issue of undocumented workers logically has to be tackled by addressing the contributing factors.

Profit-making from recruitment, management and enforcement of migrant labour must stop. The government must take over crucial aspects of labour migration such as recruitment, and eliminate the role of outsourcing companies and other middlemen as committed to by the 11th Malaysia Plan.

The government also needs to put in place firm policies on recruitment, protected avenues to justice, and flexibility of work permits for certain sectors of employment, and enforce existing laws like the Passports Act 1966, to guard against workers losing their documented status.

The government needs to review its so-called ‘tough, no-nonsense stand on illegal immigrants’. It needs to honestly assess the success of its endless raids, amnesty and rehiring programs, detention and deportation in bringing down the number of undocumented workers.

These measures target the victims of a flawed labour migration set-up; for most of them, returning home midway is not an option as they have taken big loans to pay the often inflated costs of migration charged by agents.

The many problems of labour migration, like the unwieldy number of undocumented workers, stem from the lack of clear policy guidelines.

The previous government responded to situations in an ad hoc way, often flip-flopping on decisions, rather than committing itself to formulating a comprehensive policy on labour migration.

Such a policy would have the potential of averting or resolving many of the persistent problems linked to labour migration in the country, but even the new government has shown little interest in it so far. A serious and honest appraisal of the current labour migration situation, and the political will to effect a change are urgently needed.