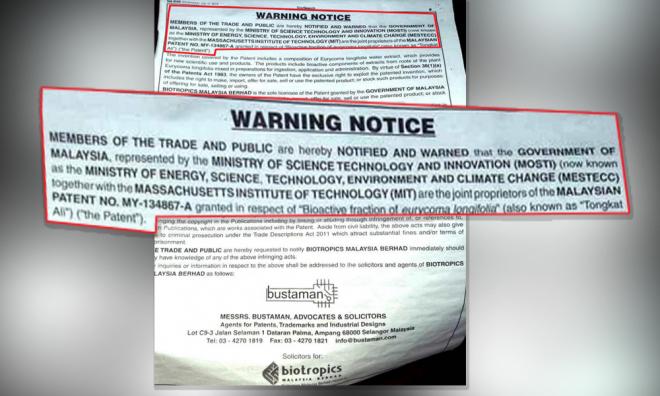 Biotropics Malaysia Berhad's patent is for ‘new scientific uses' of Tongkat Ali and not the plant itself.

Biotropics clarified this in a statement today, which follows criticism of a full-page notice published in The Star on July 31 by Biotropics's solicitors, warning manufacturers of Tongkat Ali products of the patent.

"The Malaysian Patent No. MY-134867-A (“the patent”) was granted in respect of bioactive fraction of eurycoma longifolia (also known as Tongkat Ali), for which BMB is the sole licensee.

"While the patent does involve Tongkat Ali, the invention for which the Patent was granted was in relation to new scientific uses relating to Tongkat Ali and is not for Tongkat Ali itself," read the statement.

According to its website, "the invention provides new use and products for the treatment of sexual dysfunction and male infertility. The products include bioactive components of extracts from roots of the plant mixed in preparations for topical application and administration.

Biotropics, a Khazanah Nasional subsidiary, clarified that the patent does not cover any traditional knowledge nor does it cover traditionally known claims in relation to Tongkat Ali such as tonic (tonik) , energy (tenaga) , sexual performance (tenaga batin) or blood circulation (peredaran darah) either in supplements, food and beverage forms found in stores.

The patent on Tongkat Ali is co-owned by the Energy, Science, Technology, Environment, and Climate Change Ministry and the Massachusetts Institute of Technology (MIT). It covers water extracts from Tongkat Ali for new scientific use and products.

Tongkat Ali, also known as the Malaysian ginseng, is a plant used in traditional and complementary medicine. Drinks containing its extracts are widely marketed as energy boosters or herbal supplements.

According to the notice, any producer and seller of Tongkat Ali products without permission from the ministry, MIT and Biotropics will be violating patent laws and can be fined up to RM15,000 or jailed up to two years.

PSM chairperson Dr Jeyakumar Devaraj said it was shocking that Malaysian patent laws were now misused to create monopolies over a natural product like Tongkat Ali which has been used for its medicinal properties "for centuries".