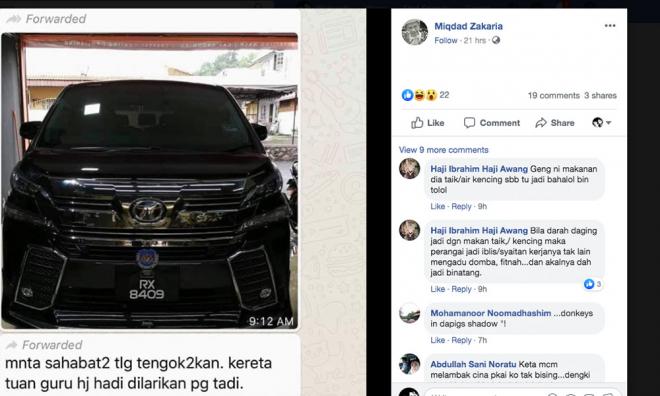 Ismi said he loaned the vehicle as a show of love to the party president.

"It was a show of my love for the president. I served with my vehicle, that is all.

"I'm also the special secretary to Tok Guru (Hadi) so I let him use the vehicle. There was no purpose other than to serve Tok Guru and nothing was expected in return," he told Malaysiakini.

He said the luxury van had been stolen from Hadi's residence in Damansara in Kuala Lumpur last Monday and a police report was lodged the same day.

There have been no updates on the case as of yet. The theft came to light after Hadi's nephew Miqdad Zakaria posted about it on Facebook.

The Vellfire had previously borne the official badge used by parliamentarians to identify their vehicles.

However, Ismi said the badge was taken off the van and was now used on another vehicle.

Ismi declined to respond to a social media comment on how Hadi has skirted needing to declare using a luxury vehicle to Parliament by simply borrowing someone else's.

"There is no need to comment on that. Let people say what they want. It isn't Tok Guru's vehicle, it is mine," he said.

He asked that the issue not be turned into a big deal.