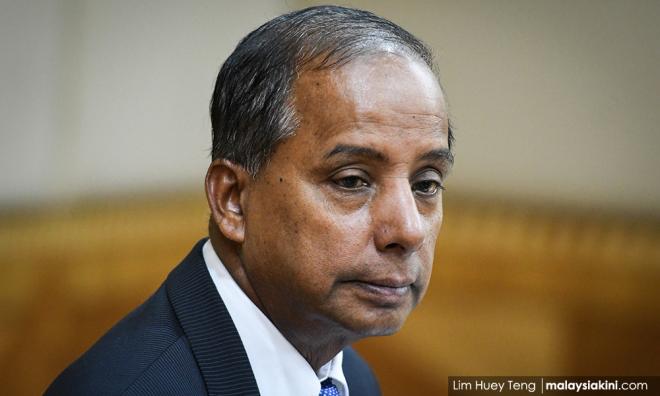 ‘Running down M’sians’: Kula to bring up Zakir in cabinet

Human Resources Minister M Kulasegaran has called for action to be taken against controversial Muslim preacher Zakir Naik "for questioning the loyalty of Hindu Malaysians".

"Naik is an outsider who is a fugitive and has little knowledge of the Malaysian history, therefore, he should not be given such privilege to run down Malaysians, what more question their loyalty to the country," said Kulasegaran in a statement today.

"His actions do not reflect one deserving of permanent resident status and this will be brought up in the next cabinet meeting."

He asked if Zakir was attempting to create a fissure in Malaysia's multi-ethnic and multi-religious society so as to continue enjoying immunity and privileges by obtaining the support of the Muslim community.

This comes after Zakir's most recent pronouncement when he claimed that Hindus in Malaysia are more loyal to Indian Prime Minister Narendra Modi than Dr Mahathir Mohamad.

"Is Naik also leveraging the current polemics related to race and religion in the country for his biased survival and benefit via the taxpayers’ money?" said Kulasegaran.

"Malaysia is a unique country that enjoyed relative peace and harmony as compared to many Islamic countries due to the great balancing act of its leaders since independence. The country’s supreme laws are secular and able to ensure the common good for all."

"Should Malaysians be split over a man called Zakir Naik?" asked Kulasegaran, who is also Ipoh Barat MP.

He said it was time for Malaysians to unite and safeguard the peace and stability of the nation by exposing Zakir’s strategy of using religious and racial sentiments in a tolerant and harmonious country.

"It’s time for the fugitive foreigner to leave Malaysia and to face charges of terrorism and money laundering charges in India," said Kulasegaran.

"This further seems to co-relate the Umno/PAS tactics that destabilise the Pakatan Harapan coalition government through ethnoreligious sentiments," he added.

Zakir, a Malaysian permanent resident, is in self-imposed exile in the country. He is wanted in his native India on money laundering charges.

Putrajaya has refused to deport the preacher, expressing concern about whether he will receive a fair trial.