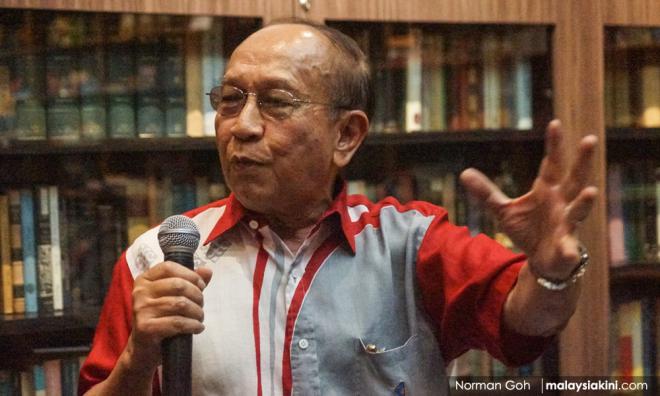 Former minister Rais Yatim (photo, above) has backed calls for controversial preacher Dr Zakir Naik to be deported to India.

Rais said this is after Zakir, an Indian national, stirred up controversies in Malaysia.

"Before Zakir Naik stayed here, we were living in harmony. Now he has unsettled the Hindus with his comments belittling them.

"Zakir is playing the role of an instigator. It is best that he is returned to India," he said.

Rais said, Malaysia keeping Zakir, who is wanted by Indian authorities on money laundering charges, was creating a diplomatic issue.

"Because of him, the Malaysia-India relation is cold. We have a lot more work to do," he said in a Twitter post.

Explaining his comment today, Zakir claimed his speech was taken out of context.

On the khat issue, which has turned racial, Rais urged DAP leaders to rein in Dong Zong which had branded the policy as a form of "Islamisation", prompting Mahathir to call the Chinese educationist group "racist".

"The vocalness of Dong Zong and its allies is due to them knowing that the need to be courteous is no longer there.

"Malays are in disorder and politically divided. Now, (DAP supremo) Lim Kit Siang and his colleagues must brainwash them," he said in a separate Twitter post.

The government had planned to implement Jawi khat lessons in the Standard 4 Bahasa Malaysia textbook.

The Education Ministry had since reduced the planned six pages of lessons to three and made learning optional, but unhappiness in the non-Malay community has persisted.