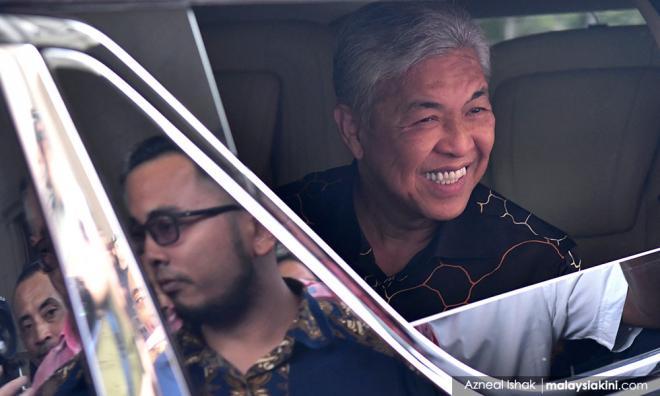 Judge Rozilah Salleh fixed the date after the prosecution requested for an adjournment of today’s proceedings as they were awaiting a decision on a review application that was filed last week at the Kuala Lumpur High Court, which had set Aug 28 for the hearing.

The court had initially set today to hear the prosecution’s request to transfer the case to the Kuala Lumpur Sessions Court.

“Therefore, I request that the hearing of the notice of motion, which has been fixed for today, be postponed until a decision is made on the review application (on the seven charges),” he added.

The defence, represented by lawyer Ahmad Zaidi Zainal, did not object to it.

On June 27, Zahid, 66, pleaded not guilty to 33 charges of corruptly receiving RM42.76 million from a company, in relation to Malaysia’s foreign visa system (VLN).

For 26 charges under the Malaysian Anti-Corruption Commission (MACC) Act, the Umno president is accused of accepting SG$9,320,000 (about RM27,996,682) from Ultra Kirana Sdn Bhd.

The bribe was allegedly an inducement for him as then Home Affairs minister to extend the company’s contract as a VLN one-stop centre (OSC) in China and to maintain an agreement with the company to supply VLN integrated system paraphernalia.

Zahid was charged with committing the offences at Country Heights, Kajang between October 2014 and July 2017.

The charges are framed under Section 16(a)(B) of the MACC Act 2009 and punishable under Section 24(1) of the same act, which carries on conviction a maximum jail term of 20 years and a fine of not less than five times the amount or value of the bribe or RM10,000, whichever is higher.

For the seven other charges, Zahid was charged in his capacity as a civil servant of corruptly accepting SG$1,150,000, RM3,000,000, 15,000 euros, and US$15,000 in cash from the same company which had a connection with his functions as then Home Affairs minister.

He allegedly committed the offences, under Section 165 of the Penal Code, between June 2015 and October 2017.

Zahid faces imprisonment of up to two years, a fine or both if found guilty.

Meanwhile, the seven charges filed against Zahid at the Kuala Lumpur Sessions Court were read out to him again at today’s proceedings here and he again maintained his not guilty plea.

The charges were for allegedly receiving a total of SG$4.24 million (RM12.74 million) from Ultra Kirana to extend the company’s contract as the OSC in China and for the VLN system.

The charges, under Section 16 (a)(B) of the MACC Act 2009 and punishable under Section 24 (1) of the same act, carry a maximum jail term of 20 years and fine of RM10,000 or five times the amount of the bribe, whichever is higher, on conviction.