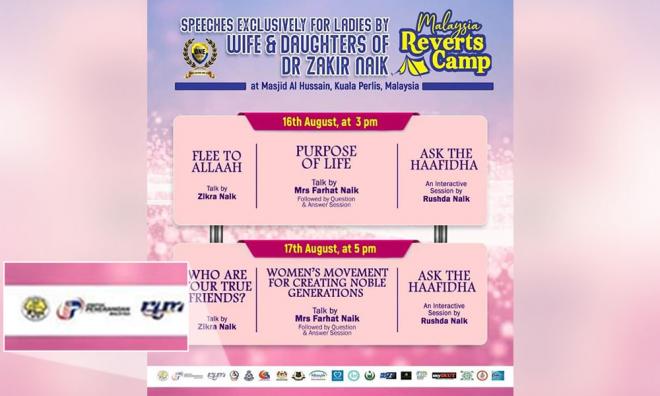 The Communications and Multimedia Ministry said it is not involved in the "Malaysia Reverts Camp" event featuring controversial preacher Dr Zakir Naik.

"The Communications and Multimedia Ministry, including the Information Department and Broadcast Department, is not involved in organising the 'Malaysia Reverts Camp' which will be held in Perlis from Aug 16 to 18 as circulated on social media.

"Therefore, the organiser has been asked to remove the logos of the ministry, Information Department and Broadcast Department from all programme and publicity material for the event," it said in a statement today.

The ministry said it hopes that its logos will not be misused in future.

"The use of official logos by the ministry and departments without permission is unethical and can confuse the public," he said.

Meanwhile, a ministry source who was not authorised to speak on record claimed the use of the logos as an act of "sabotage".

According to a post uploaded on Zakir's (above) official Facebook page today, he and his family will give talks at Al Hussain mosque in Kuala Perlis, popularly known as the Floating Mosque.

The Perlis Islamic Religious and Malay Customs Council and One Centre Malaysia are co-organisers of the event.

One Centre Malaysia, on its Perlis Facebook page yesterday, said Zakir's wife Farhat and their daughter Zikra are scheduled to deliver speeches in an "Exclusively for Ladies" slot at the same venue tomorrow and on Saturday.

The poster shared by the page listed, among others, the Information Department and RTM, as partners.