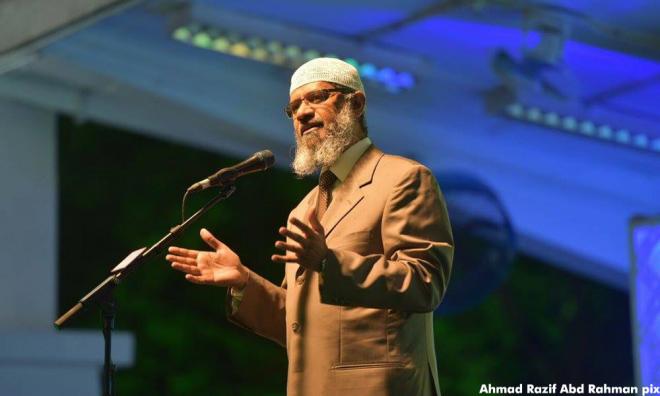 Controversial preacher Dr Zakir Naik and his family are expected to deliver speeches in Perlis in an event called "Malaysia Reverts Camp" which begins tomorrow.

According to the post uploaded on Zakir's official Facebook page today, they will give talks at Al Hussain mosque in Kuala Perlis, popularly known as the Floating Mosque.

Zakir's son Fariq will be the first to speak tomorrow and he will be joined by the preacher on the following days.

Zakir is slated to discuss two topics, including "Ask Dr Zakir - An open Question & Answer Session", which will be telecast live via an online network.

The Perlis Islamic Religious and Malay Customs Council and One Centre Malaysia are co-organisers of the event.

Meanwhile, One Centre Malaysia, on its Perlis Facebook page yesterday, said Zakir's wife Farhat and their daughter Zikra are scheduled to deliver speeches in an "Exclusively for Ladies" slot at the same venue tomorrow and on Saturday.

The poster shared by the page listed, among others, Information Department and RTM, as partners.

However, it is unclear whether their speeches will be aired on RTM, the national broadcaster.

Zakir courted controversies recently following his remarks on Chinese and Hindu Malaysians during a talk in Kelantan last week.

He had remarked that Hindu Malaysians seemed to trust the Indian government more than Prime Minister Dr Mahathir Mohamad, while also stated that "old guests", referring to the Chinese, to "go back."

However, Zakir stressed that his statement on the Hindu community had been misquoted.

Zakir, a Malaysian permanent resident, is on a self-imposed exile in the country as he is wanted in his native India on money-laundering charges.

Home Minister Muhyiddin Yassin had also noted that Zakir is not on Interpol's red notice list as well as not a suspected terrorist listed under the United Nation Security Council Resolutions list.

Mahathir had said that Malaysia would welcome any other country willing to take in the preacher.

It was reported on May 2017 that Saudi Arabia had granted citizenship to Zakir.

Police probing 115 reports against Zakir, 6 against Dong Zong
15 Aug 2019
Why are we at each other's throats because of a foreigner, asks Rafidah
15 Aug 2019
PKR to wait for Anwar before deciding on Zakir Naik
15 Aug 2019
Afif wants Zakir to say sorry, but supports his right to refuge
15 Aug 2019