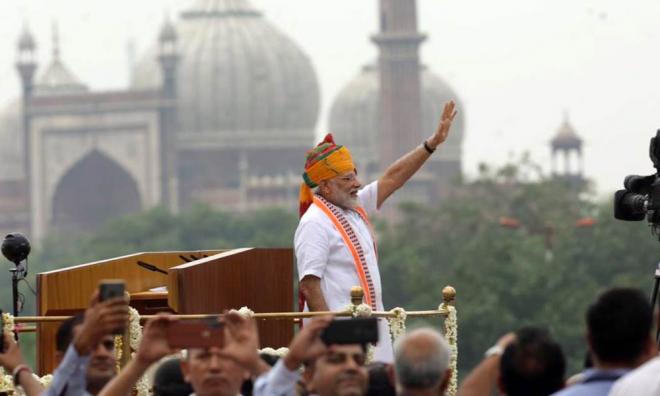 Indian Prime Minister Narendra Modi trumpeted his abolition of Kashmir’s special status in an Independence Day speech on Thursday, but there was little sign that he had won over people in the region’s biggest city – and a deadly border clash with Pakistan added to tensions.

Modi said the constitutional status of Jammu and Kashmir had encouraged corruption and nepotism, while creating injustice for women, children and minority communities.

“Today, every Indian can proudly say ‘One Nation, One Constitution’,” said Modi, speaking from the ramparts of the historic Red Fort in New Delhi.

Critics say the policy will trigger a backlash from Kashmiris aggrieved by losing their exclusive right to buy property in the state and to fill state government jobs.

In a clampdown in the region over the past 12 days, authorities have cut internet and phone links, set up numerous roadblocks and detained more than 500 local leaders and activists.

In Kashmir’s biggest city, Srinagar, India tightened security further, sealing off many roads with barbed wire for an Independence Day parade attended by only a few locals.

Outside the Sher-i-Kashmir cricket stadium where the event was held, the streets were empty, and inside, there were fewer than 500 spectators, with helicopters and drones with cameras hovering overhead. A police official said the stadium could hold at least 2,000.

Satya Pal Malik, appointed Jammu and Kashmir’s governor by New Delhi, said the change of status would bring prosperity and development and help to make the region a hub for tourism and industry.

He said Islamist militant recruitment had fallen and incidents of stone-throwing against security forces after Friday prayers “have all but ended”.

However, witnesses from several parts of Srinagar have reported daily stone-throwing, and Reuters correspondents have witnessed at least two such incidents in the past few days.

On Wednesday, Reuters reporters met four men who displayed injuries that they said had been caused by pellets fired by security forces in Srinagar’s Soura neighbourhood.

“Indians are free but we Kashmiris are yet to get freedom,” he said. “If we had been independent, we would not have been caged like this.”

There is little sign that the crackdown will ease anytime soon.

Indian troops detained a Kashmiri reporter working for a local newspaper in an overnight raid at his house in the Tral area of Pulwama district, his family said.

Irfan Ahmad Malik, 28, works for Greater Kashmir, the largest-circulation daily in the Kashmir valley. It was not immediately clear why he had been detained.

“The troops jumped over the compound wall of our house last night at around 11:30pm,” said Malik’s father Mohammad Amin Malik, 57.

A spokesperson for the Jammu and Kashmir government said it was looking into the incident.

On Thursday there were also signs that the regular shelling between Indian and Pakistani troops along the contested border that splits Kashmir, known as the Line Of Control (LOC), was intensifying.

Major General Asif Ghafoor, spokesperson for the Pakistan armed forces, tweeted that three of its soldiers had died along with five of India’s. He said India had started the exchange.

But an Indian army spokesperson said there had been no casualties. In a statement, the Indian army said Pakistan had begun violating a ceasefire at around 7 a.m.

Pakistan, which claims all of Kashmir, has already cut trade and transport links and expelled India’s envoy in retaliation for Modi’s move.

It is also taking the issue to the UN Security Council, which is due to meet on Friday to discuss the issue.

In February, a suicide bomber belonging to a Pakistan-based Islamist group killed 40 Indian paramilitary police in Kashmir. India hit back with a bombing raid into Pakistan and an Indian pilot was shot down over Pakistan, but then handed back.

Pakistan observed a ‘Black Day’ on Thursday to coincide with India’s Independence Day celebrations, and one of the main militant groups fighting Indian rule in Kashmir led a protest through Pakistan’s part of the disputed region, Azad Kashmir.

Supporters of the Hizbul Mujahideen militant group were among more than 1,000 people who marched through Muzaffarabad holding black flags and shouting anti-India slogans.

“As long as India continues its occupation of Kashmir, we will fight within the occupied territory with full force,” Hizbul Mujahideen’s deputy commander, Saifullah Khalid, told the crowd.

India has banned Hizbul Mujahideen as a terrorist group. Pakistan allows the organisation to exist but denies Indian allegations of financial support.