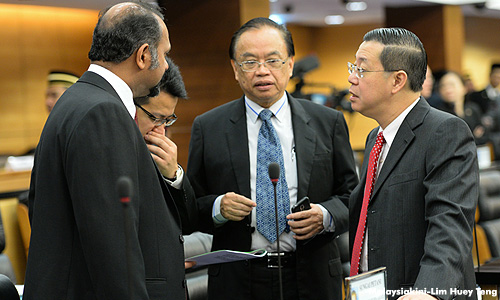 YOURSAY | ‘Stick to your principles and we will continue to support you.’

Apalah: This anti-Lynas issue was part of the Pakatan Harapan’s election manifesto.

If Harapan under Prime Minister Dr Mahathir Mohamad reverses this stand and to the loud objections against Lynas after we experienced a similar environmental catastrophe at Bukit Merah, Perak, then we can only conclude that Harapan - together with PKR and DAP - has not lived up to their words.

Is Harapan playing into the hands of a self-implosion engineered by a dark force within the coalition’s corridors of power? Think, PKR; think, DAP. And then take corrective actions to counter this dark force.

Kangkung: It is time for DAP to leave Harapan even if it means Umno/PAS will come into power. DAP's dignity should be preserved. And forget about the Malay leaders from PKR and Amanah.

Lynas, khat, Zakir Naik and the rest are issues purposely engineered by Mahathir and Bersatu for political reasons.

Mahathir knows all these issues will destroy DAP and he is working to ensure Umno/PAS Malay support for him and his party.

Stick to your principles and we will continue to support you even if you are in opposition. Don’t be so power-crazy as it only brings you more hatred, especially with the way Mahathir is running the government.

With a host of controversial events unfolding within such a short period, the meeting between Umno/PAS and Sarawak’s chief minister, we must support and stand by DAP.

They have been cornered and a host of cybertroopers chastise and influence a gullible audience on so-called DAP failings, thus discrediting the party and prompting them to pull out from the government.

Anonymous54: Indeed, DAP should not pull out from the government but remain steadfast and fight from the inside. Pulling out will leave the doors open for Umno/PAS, Azmin Ali's PKR faction and an East Malaysia party to form a coalition.

Then it will be khat, and more, that we will have to contend with. Incidentally, where is PKR leader Anwar Ibrahim? He has been silent on all of this. In view of this, can we expect any better when he is prime minister?

ChuenTick: It looks like it will be for the long haul on the fight against Lynas.

Burning the Harapan manifesto may be symbolic but it is clear the coalition no longer intends to keep its 14th General Election promises.

Like the Asian Rare Earth plant in Bukit Merah, this new emperor, who oversaw that tragedy as well, will only change his mind when bodies start falling.

The statistics given so far appear to be mixed. For Lynas, it’s no big deal, while for the anti-Lynas groups, the plant is a health hazard.

There have been reports of residents nearby supporting Lynas. Has anyone done a survey about the actual level of support, or otherwise, from those people staying in its vicinity?

Apanakdikato: DAP leaders and ministers need to be committed to the Harapan manifesto or leave the government. In this regard, Mahathir should honourably hand over the premiership to Anwar.

Mahathir should realise that whatever that's left of his legacy is eroding by the minute. He should leave when there's still a little respect left for him.

It took 60 years for the rakyat to lose their respect for BN but it’s only taking less than two years for Harapan to reach the same status.

Wira: Umno and PAS are looking at the imminent collapse of Harapan so that they may take over. With Azmin's faction, Mahathir is confident he can still remain as PM.

Notice the silence from Umno/PAS when all these issues are boiling. It's Bersatu who is responding to Dong Zong. Take a step back, DAP. Mahathir is not immortal. Play your cards right.

Roger 5201: So much for righting his 22 years legacy of corruption, cronyism and nepotism. Mahathir has gone nuts in his drive to outdo Umno and PAS in destroying DAP.

Does he seriously believe this will see the ascension of his son, Mukhriz? Does the rakyat's interest, social harmony and well-being even count for anything anymore?

Ipoh PP: So many issues detrimental to the country. All because of one silly old stubborn man. DAP should consider quitting the government if these acts of sabotage to the party continues.

At least in this way, your voting base stays intact.

Caripasal: It is obvious Mahathir and his Bersatu have a different dream from DAP/PKR/Amanah despite sleeping in the same bed.

Harapan, like the previous Pakatan Rakyat, might suffer the same fate due to, once again, one particular racist party in the coalition.

It is time for us to show the trio the full support to fight the racist, like what we did after the split of Pakatan Rakyat. Do not give the racist any opportunity.

Jaya Janam: Give the ultimatum. Either he, Mahathir, toes the Harapan line or you leave the coalition.

Let him make a comeback again under an Umno/PAS/Bersatu alliance as he seems to have unfinished business before his time is up.