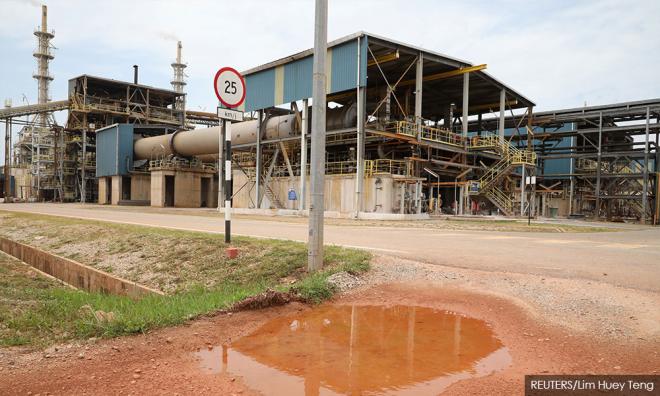 The government is seen as being very cautious and takes into account numerous factors before making a decision to renew the operating licence of the rare earth processing factory, Lynas Malaysia Sdn Bhd, di Gebeng, Kuantan, for six months.

Lynas Advanced Materials Plant (Lamp) Operations Evaluation Executive Committee chairperson Prof Mazlin Mokhtar opined that the conditions imposed on the factory were a government move to reduce the risk of exposure to radioactive materials, which existed naturally, to the local populace.

"The government under the leadership of Prime Minister Dr Mahathir Mohamad made the decision to move forward by allowing the operations of the factory, a special and strategic investment effort involving the generation of opportunities for the local residents.

"It also has a potential of placing Malaysia as a country which is involved in the high technology industry service in the future because the factory in Gebeng is one of the few processing rare earth factories outside of China.

"Based on the condition imposed, the government is seen as making a very careful move when asking Lynas to submit detailed planning for the construction of the ‘cracking and leaching’ facility abroad," he said when contacted by Bernama in Kuala Lumpur today.

Having the process done abroad, he said, would hopefully reduce the radioactive content brought in to be processed in Gebeng to a concentration of below a Becquerel a gramme compared to the level detected at the factory prior to this, of about 6.2 Becquerel a gramme.

One Becquerel a gramme is a safe level fixed by the Malaysian government through the Atomic Energy Licensing Board (AELB). The 1Bg/g is believed adequate to assure the safety of the populace and environment.

However, at the same time, Lynas also must quickly find a suitable site for the construction of a Permanent Disposal Facility (PDF) to bury over 580,000 metric tonnes of waste from the Water Leach Purification (WLP) which is now dumped in the factory area.

‘’It is feared that if heavy rains and a major flood take place in Kuantan, the waste may be eroded and seep into the environment and affect human health and the environment.

“… the government has told Lynas to find a suitable site to build the PDF and bury the piled up WLP waste with extreme care to prevent the possibility of leakage which can create problems in the future.

‘’Before the PDF is built, Lynas must also submit a complete PDF construction plan, an adequate financing plan to accommodate the overall PDF construction and operation in accordance with the international standard,’’ said Mazlin who is also a Universiti Kebangsaan Malaysia (UKM), Institute for Environment and Development director.

He said that the move by the government ordering Lynas to stop any research and development linked to the reuse of the WLP radioactive residue as a "condisoil" in agriculture was also apt because, to date, it had yet to be proven that the material was truly safe for use in the sector.

‘’Maybe possible (used as fertiliser for agriculture), but the results of research, to date, are not convincing and still require further tests which may take a period of several years more before getting a definitive result,’’ he added.