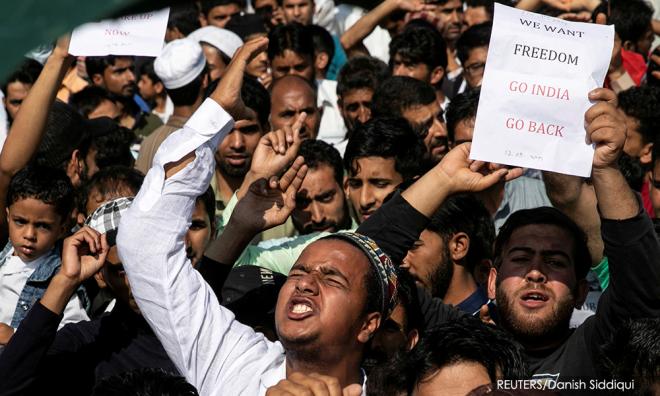 Besieged Kashmiri neighborhood in test of wills with India

For more than a week, the young men of Soura, a densely populated enclave in Kashmir’s main city of Srinagar, have been taking turns to maintain an around-the-clock vigil at the entry points to their neighborhood.

Each of the dozen or so entrances have been blocked with makeshift barricades of bricks, corrugated metal sheets, wooden slabs and felled tree trunks. Groups of youths armed with stones congregate behind the obstacles. The aim: to keep Indian security forces, particularly the paramilitary police, out of the area.

“We have no voice. We are exploding from within,” said Ejaz, 25, who like many other residents in Soura interviewed by Reuters gave only one name, saying he feared arrest. “If the world won’t listen to us too, then what should we do? Pick up guns?”

Soura, home to about 15,000 people, is becoming the epicentre of resistance to Indian government plans to remove the partial autonomy that was enjoyed by Jammu and Kashmir, the country’s only Muslim-majority state. The enclave, which has become a no-go zone for the Indian security forces, is now a barometer of the ability of Prime Minister Narendra Modi’s Hindu-nationalist government to impose its will in Kashmir after its dramatic move on Aug. 5 to tighten its control over the region.

The change, the government said, was necessary to integrate Kashmir fully into India, tackle corruption and nepotism, and speed up its development, which Modi says is the key to securing lasting peace and defeating terrorism.

In Soura, it’s hard to find anyone who supports Modi’s (above) move. Many of the more than two dozen residents interviewed by Reuters over the past week referred to the Indian prime minister as “zaalim”, an Urdu word meaning “tyrant”.

The constitutional change will allow non-residents to buy property in Jammu and Kashmir and apply for jobs in local government. Some Muslims in Kashmir say they fear that India’s dominant Hindu population will overrun the lush state at the foot of the Himalayas, and Kashmiris’ identity, culture and religion will be diluted and repressed.

“We feel like we are guarding the LOC here,” said Ejaz. The LOC refers to the Line of Control, the militarized de facto border between the Indian and Pakistani-controlled parts of Kashmir. For decades, Kashmir has been a source of friction between nuclear-armed India and Pakistan. Both nations claim the region in full and have fought two wars over the territory since 1947.

Residents in Soura say that dozens of people have been injured in clashes with the paramilitary police over the past week. It is unclear how many have been detained.

A spokesman for the Jammu and Kashmir government declined to answer questions from Reuters.

The Indian government’s Home Ministry did not return calls and emails seeking comment.

In Srinagar, the government has banned gatherings of more than four people, set up roadblocks to prevent movement, and detained more than 500 politicians, community leaders and activists. Internet and cell phone services have been out for more than two weeks throughout the city and the rest of the Kashmir valley, making it difficult for opponents of the government’s decision to organize protests.

Landline phone service has begun to return to the region, but not to Soura, which is best-known for a Muslim shrine and a well-regarded teaching hospital.

Residents have found other ways to organize. When they spot security forces trying to enter the area, residents say they rush to a mosque and sound the alarm by playing a devotional song calling for people to “stand against illegal occupation”, or by issuing an alert over the loudspeaker.

At intersections in the warren of narrow lanes that make up Soura, a largely lower middle class area with a lake and marshy wetlands to its west, there are piles of bricks and stones for use against Indian troops.

A protest on Aug. 9, when people took to the streets after Friday prayers, marked Soura as the focal point of resistance to the Indian government’s decision. As residents from surrounding neighborhoods joined the demonstration, the crowd swelled to at least 10,000, according to local police sources.

More than a dozen residents told Reuters that around 150 to 200 security personnel in riot gear attempted to enter Soura after the protests, resulting in clashes with residents that went on late into the night, as police fired tear gas and metal pellets.

Since then, Soura has been the scene of smaller demonstrations and daily running battles with the security forces, according to people living in the neighborhood. The security forces have made several attempts to enter Soura, according to residents, with the apparent goal of sealing off a large area of open ground next to the Jinab Sahib shrine that has become an assembly point for protesters.

“Every day they are trying to attack us here, but we are fighting back,” said Owais, in his early twenties. “We feel like we are trapped.”

India’s paramilitary police say they are determined to regain control of the area. “We have been trying to enter, but there is a lot of resistance in that neighborhood,” said an Indian paramilitary police official in Srinagar who spoke on condition of anonymity.

Another senior security official told Reuters on the condition of anonymity that “some of the youth of the area are radicalized” and it is “a hotbed of militancy”. Islamist militant groups, he said, were influential in the area.

Separatists have fought for the past three decades Indian rule in Kashmir, a conflict that has killed 50,000 people, according to the Indian government. Human rights activists say the toll is much higher. Many Kashmiris favour independence or joining India’s Muslim-majority arch-rival Pakistan.

The Islamic State, which wants to establish a “caliphate” across the Islamic world, has also claimed responsibility for some attacks on Indian troops in Kashmir in the past couple of years.

Historically, the insurgency has been largely led by militants from Pakistan, who have infiltrated across the Line of Control. But there have also been a significant number of Kashmiris who have picked up arms in recent years.

While the level of support for Islamist groups in Soura is unclear, posters with pictures of militants can be seen on many walls and electricity poles. That includes Burhan Wani, a popular young commander of the largest Kashmiri militant group, Hizbul Mujahideen. Wani, who was born on the Indian side of the border, was killed by security forces in 2016, sparking deadly protests and curfews that lasted months.

The battle over Soura has received little coverage in the Indian media. That is partly because of the communications blackout in the region, but also as many local TV channels and newspapers have emphasized the government’s position - that there is little resistance in Kashmir to its plans.

In Soura, the reality is different. Fearing a crackdown by security forces, some traders selling Kashmiri Pashmina carpets and shawls have shut shop. Fishing and lotus farming in the enclave’s polluted Anchar Lake continues, but those involved say it is difficult to get their produce out of the area.

The security situation means people’s movements are restricted. Indian paramilitary police are present at every exit route from Soura. Surveillance drones and helicopters have been seen flying over the area.

Some locals said the Indian security forces were keeping a close watch on the local hospital, the Sher-i-Kashmir Institute of Medical Sciences, with the aim of arresting injured protesters. People who have been hit by pellets fired by the security forces say they have avoided going to hospitals because they fear being detained.

“We don’t go to the hospital unless it’s something serious or we’re hit in the eye,” said Yawar Hameed, a physiotherapist who has been helping the injured.

In a two-story wooden home, Hameed was bent over 45-year-old Bashir Ahmed, cleaning a pellet wound near Ahmed’s left eye with a swab of cotton wool dipped in disinfectant.

But Hameed, 23, had no training for treating pellet wounds, he said.

Ahmed winced in pain as Hameed used forceps to remove a pellet from his lower back. After several attempts, he succeeded in extracting a small silver metal ball.

Minutes later, two young men were brought into the room. They knelt down and pulled off their T-shirts, revealing bloody marks across the front of their torsos where they had also been hit by pellets.

“If we have to live here, we need to know how to do this,” said Hameed.