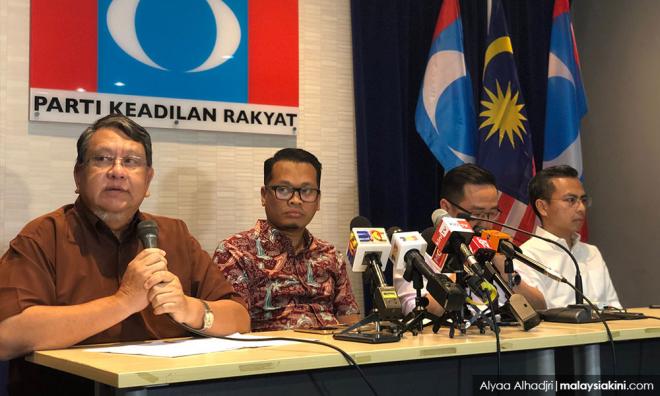 The matter was discussed and decided upon during the party's weekly political bureau meeting chaired by PKR president Anwar Ibrahim at its headquarters today.

PKR central leadership council member Nik Nazmi Nik Ahmad later read out the political bureau's statement, in which the party said it respected the authorities' decision to ban Zakir from speaking on any platform in Malaysia.

"While we recognise the right to spread dakwah, it is inappropriate to use any forum to attack any race in the country.

"We leave the final decision on his permanent residence status to the authorities based on legal and humanitarian grounds," Nik Nazmi said.

"At the same time, we urged all parties to respect the sensitivities of all races and the rakyat," he added.

After two rounds of questioning by the police following 115 reports lodged over his remarks made on Aug 8 in Kelantan, Zakir yesterday issued an apology for the hurt caused by his speeches to non-Muslims.

Subsequently, the police confirmed that the Indian-born televangelist had been banned from speaking in Malaysia on grounds of national security.

"For now there is no decision," he said briefly.

PKR disciplinary council chief Ahmad Kasim, who was also present, later said no warning letter had been issued to Azmin as attendance of leaders is a matter to be dealt with by the secretary-general.

"That is not the affairs of the disciplinary council, that is for the secretary-general (to address)," he said.

The letters were believed to have been issued over the pair's remarks concerning a sex video implicating Azmin.

He explained PKR was satisfied that Amirudin had shown respect for the party's leadership and indicated an intention to end any internal conflict among them.

Ahmad said Farhash had similarly apologised for his remarks and promised to not repeat them.

"So the political bureau have accepted both their explanations," he added.

Farhash was questioned by the party over remarks made regarding Azmin following the PKR Perak chief’s release from police custody on July 23.

He had been among several individuals detained in connection with the sex video's circulation.

Meanwhile, it was at the time believed that the letter to Amirudin concerned his remarks that "those who had been through a similar ordeal and fought through a dark period of history" were behind the video.